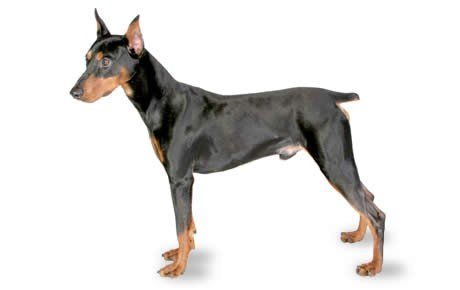 There are so many qualities about this dog that after reading this, you could feel strongly compelled to get one right away.  The German Pinscher dog is an agile, strong, elegant, working, and highly intelligent dog. We told you, right?

This native from Germany was developed at the same time with the Doberman and other Pinscher dogs.  Breeders designed this dog to prey on vermin around the late 1700s and early 1800s.  There is no exact time as when it happened but paintings from 1780 portray a dog similar to the German Pinscher dog.

The direct ancestor of this dog is the Rat Pinscher, a dog breed that went extinct in the early 1800s.  After the World Wars almost wiped out these dogs, a West German named Werner Jung saved the breed.  The first German Pinscher dogs were imported to the U.S. in the late 1970s.  The AKC officially recognized this dog in 2003.

This dog is of medium size and short coat. His strong and square build give him an elegant appearance. He is agile and powerful, traits that bestow him with great hunting abilities.  He usually weighs between 25 and 45 pounds and is 17-20 inches high.

This dog is always watchful, which makes him a great guard dog.  He is agile, energetic, determined, fearless, intelligent, and loyal.  He also makes an excellent companion.

Caring for a German Pinscher dog

Given his energetic level, this dog needs a lot of exercise.  He requires at least two lead walks around the neighborhood every day.  He is also a working dog so he always wants to have a job to do.  Don´t provide any of this to your German Pinscher dog and you will create a bored animal with an appetite for destruction.  If you have to leave him alone for hours, give him a toy or something to keep him busy.  He is no couch potato.

This dog´s high intelligence makes him easy to train.  Always use positive reinforcement and avoid harsh negative responses. The younger he is trained, the better.

We know you love your pup and want the best for him.  Here in Dogalize we realize how important your pet is to you.  This is why we have updated information on how to take better care of him.