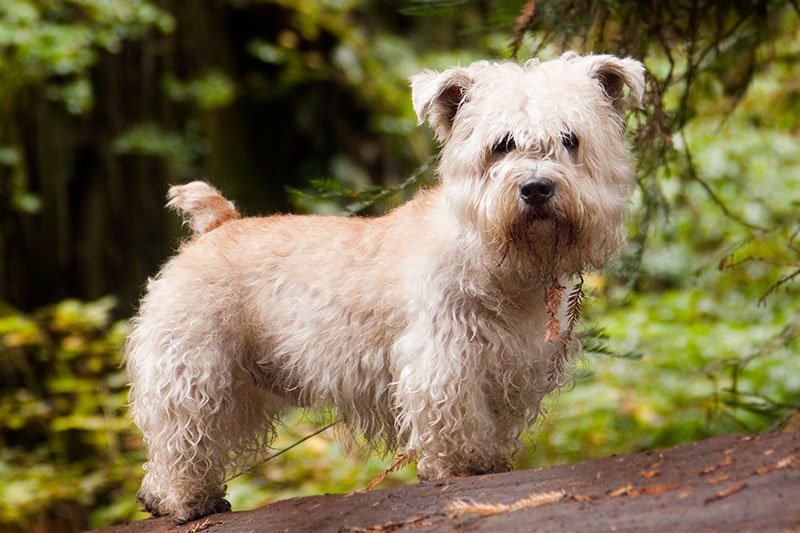 It might not seem like it when you first look at him, but the Glen of Imaal Terrier dog is a cunning hunter.  He originated in a valley of Ireland of the same name to hunt fox and badger and to get homes rid of rodents.

Fans of the Glen of Imaal Terrier dog say that he descended from the dogs brought in by the settlers that were given land in the valley in exchange for serving in Queen Elizabeth’s I army around the 16th century.  They take their name from this valley in the Wicklow Mountains where such settlers mixed their dog breeds with the local canines.

Breeders then developed the dog to hunt fox and badger.  They also made excellent rodent hunters in homes. The American Kennel Club officially recognized them as a breed in 2004.

This dog is a medium-sized working terrier.  He is longer than he is tall and carries a double coat of medium length.  He stands at a bowed headquarters with turned out feet.  Typically, an adult weighs around 36 pounds and stands at 14 inches.

The looks of a Glen of Imaal Terrier dog might be deceiving.  He is actually a very brave and fierce dog.  Very protective of his family, he is not likely to start a fight but he will definitively finish it.

His traits make him a great companion dog.  He is loyal, intelligent, and patient.  Due to his independent thinking, he appears as stubborn to many.

Caring for a Glen of Imaal Terrier dog

This dog is low maintenance.  He loves his humans and will do better living inside the house with them.  They are not very noisy but you might accidentally encourage you to bark and he will do so incessantly.

A daily 30-minute walk is great for this dog.  He can live both in a large house or a small apartment.  Make sure you spend time playing with him.

Training this dog is easy and necessary.  He is intelligent and enjoys learning.  Just make sure the training and playing is actually fun and diverse.  The Glen will get bored easily if not stimulated enough.

The first thing you need to remember is that since he is a terrier, he loves to dig.  Protect your beautiful flowers by training him to dig in a designated spot.  When he barks, do not run to see what the fuss is about.  You will be teaching him that barking will attract his favorite person’s attention.