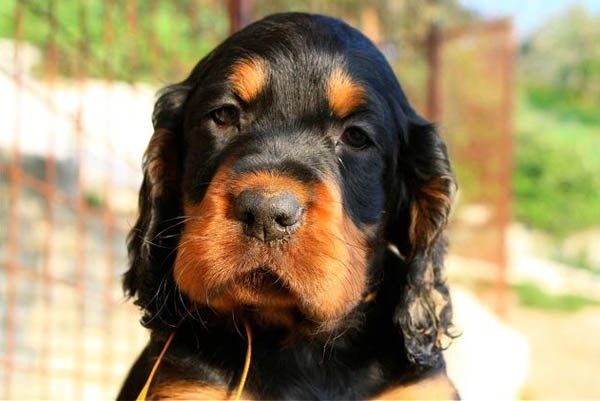 The Gordon Setter dog, a great family dog and extraordinary companion, was originally bred to hunt quail and pheasant.  These dogs excel in obedience and agility.

Scotland knew about black and tan coated setters as early as 1620.  These dogs were described as excellent hunters and of beautiful appearance.  Originally, these dogs came in white, red, tricolor but then the black and tan prevailed as established by the fourth Duke of Gordon during the early 1800s.

The Duke died in 1827 but his heir, the Duke of Richmond inherited and carried on his kennel. In 1842, Daniel Webster and George Blunt bought Rake and Rachel from a Gordon Castle and brought them into the United States.  These two dogs became the foundation of the breed in the US.  The AKC officially recognized this dog breed in 1884.

Gordon Setters are the largest of the setters that include the English and Irish Setters.  The dogs have a black coat with distinctive markings of mahogany or chestnut color on their lower legs and paws, throat, vents, and muzzle.  This coat can be straight or slightly wavy but never curly.  It is silky and soft.

The Gordon Setter dog is a well-muscled one with a strong and sturdy built body.  The male can be 24 and 27 inches tall and weighs 55 to 80 pounds and the female stands at 23 to 26 inches and weighing 45 to 70 pounds.

This is an excellent watchdog with a strong loyalty to his family.  He is fearless, agile, alert, capable, and intelligent. When it comes to hunting, he is not too fast nor will he go long distances.  He is more like a personal hunter with a lot of stamina.

Caring for a Gordon Setter

If you are a frequent runner or jogger, this dog can keep up with you during your heat.  They require one or two hours of strenuous exercises but wait until they turn at least 2 years old to introduce them and do it gradually.  Provide strong leadership without using anger or violence.

The Gordon Setter dog is generally easy to train but he also has a mind of his own.  Provide him with consistent training, firm hand, and strong leadership.  If you don´t, he will establish his own rules and become dominant, willful, and stubborn.

This is one breed that does not enjoy being left alone in a backyard.  In Dogalize we know how much you love your pet. This is why we have amazing resources for you to better take care of your dog.  Visit us for more information.