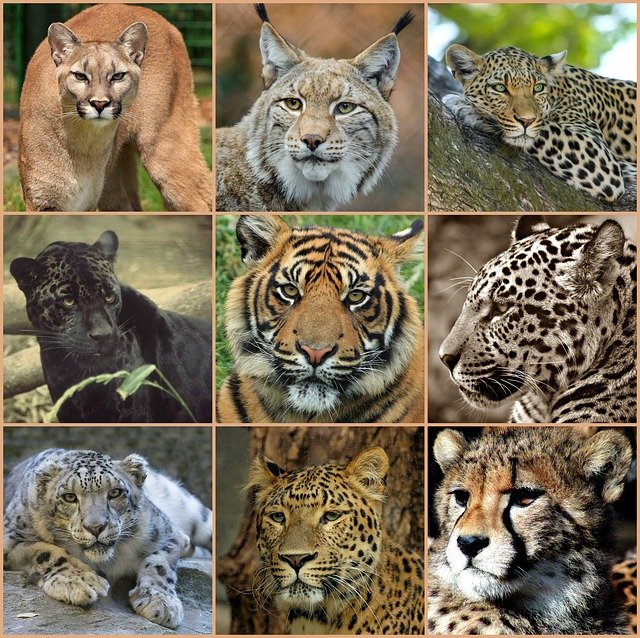 Big cats: who are they?

So, do you really want to have a big cat? Very nice of you. Unless you are an Arab rigged billionaire, you can’t. The term “big cats” refer to the four largest cousins of your kitty cat:  lions, leopards, tigers, and jaguars.

All domestic cats are either small or medium sized and none of them is even close to the size of these colossuses. Let’s take a quick look at their characteristics.

The big cats have several characteristics in commons, besides, of course, being big. One of them is that they are the only ones of the five species in the Panthera genus that can roar.

The truth is that these four are not the only big cats out there. There are probably some others you can think of like the cheetah and the puma. Other less known big cats include the clouded leopard, snow leopard, and the Sunda clouded leopard. None of these can roar, however.

In order of descending potential size, the list of the four big cats is tigers, lions, jaguars, and leopards. Despite their difference in size, their physical structure and habits are very similar. The one exception to this is the cheetah, which moves pretty far away from this basic body structure and skills.

Threats to the survival of the big cats

The main threat that these wild cats suffer is the destruction of their habitat and poaching. Although threats vary depending on geographic location, these two are the most significant.

One noticeable issue is the increasing trades of these animals. In the United States, the Captive Wildlife Safety Act ban the trading of these animals within states. There are also 19 states that banned the ownership of these cats as pets.

In Dogalize we are not supportive of owning wild animals as pets. Dogs and cats have been domesticated for millennia and have adapted to our human style. Any wild animal inside a domestic house has been pulled as is from his habitat.

Visit us and check out the amazing resources we have for you to better care for your domestic little companion. Contact us if you have any question.