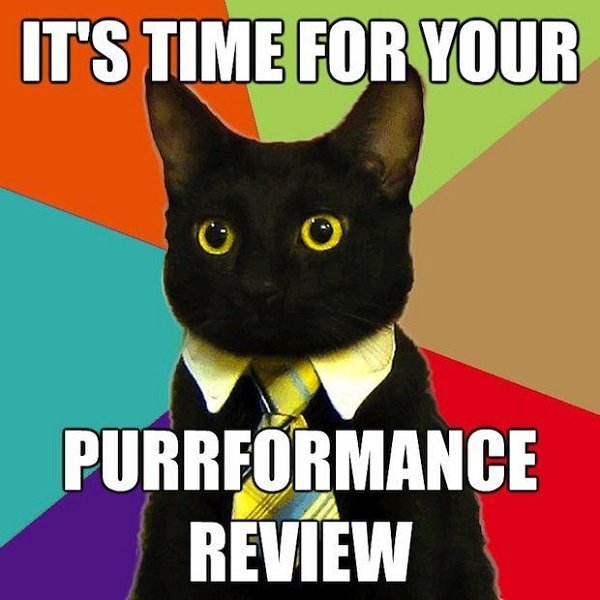 Business Cat is a very popular meme image macro featuring a black cat wearing a tie in front of a Starbucks background. The messages on the meme include something a boss would say but with a feline twist.

Origin of the Business Cat meme

The original picture of Business Cat was posted on January 1st, 2011 on Something Awful forum. User Apple Jax posted the image of Emilio, her boyfriend Daniel Vecchitto’s cat.   At the moment of the picture, Emilio was wearing a tie he got for Christmas from Etsy shop Whisker Kisses. Three days after that, the picture was posted on Reddit under the title “Business Cat”. Hours after this, the picture was placed on MemeGenerator. The first caption on the macro was “No LOL here. Get your ass in my office”, and placed as a second threat on Reddit.

The meme parodies the same concept of the boss exploited by the American and British show “The Office”. The fact that the macro involves a well-dressed cat with a tie makes it all a lot funnier and the success of the meme relies on that.

After the success of the meme, the owner of the cat has gone on to create a website on March 7th, 2011.  If you can think of anything your boss has said,  you can put it on the Business Cat meme as a tagline.  Many users include some pun lines such as “It’s time for your Purrformance review”.

In June of that same year, the blog “Fuck Yea Business Cat” was created but was not continued but for a month only. Today, even though the meme does not enjoy the same massive popularity it did when it first came out, still has some users.

Here in Dogalize, we know how important your cat is for you. This is why we have collected amazing resources to help you better understand your cat. Visit us to learn more.