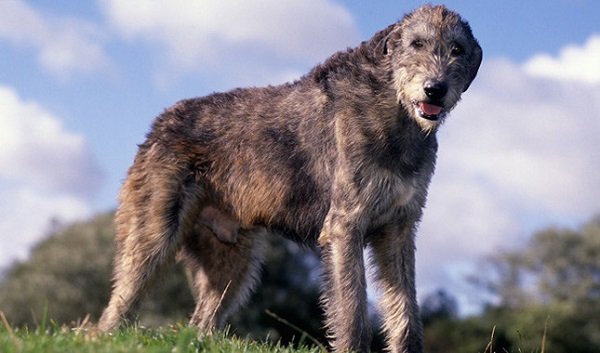 The Irish Wolfhound dog was originally conceived to drag men off their horses and chariots. He was also used for hunting deer, boar, and wolves. Today, he makes a great companion who is also good at tracking and obedience competitions.

Wherever he went, the Irish Wolfhound dog was a marvel. This does not come as a surprise if you look at his size. Early Irish literature has early writings about this dog. In 391, Roman consul Aurelius said that “all Rome viewed with wonder” his seven Irish Wolfhounds.

This dog was capable of pinning down the Irish elk, which was twice his size. He was also great at pursuing the wolf, the animal he would eventually take his name from. Before that, he was simply called Cu, a word that probably means war dog, wolf dog, or hound.

When the elk and the wolf were hunted to extinction, the Irish Wolfhound was kept only as ornament in homes, no longer for hunting. Would it had not been for Major H. D. Richardson, the breed would had disappeared in the mid-1800s.

The first Irish Wolfhound dog was registered in America in 1897. He ranks 73rd in popularity in America. The AKC recognized this breed officially in 1897.

The AKC considers this dog the tallest of the canine world. His coat is rough and his body is muscular but gracefully built. The coat color can be brindle, gray, black, white, fawn, and wheaten.

The male can be 32 inches tall and weight 120 pounds. The female can be at least 30 inches and weigh 105 pounds. This means that the Irish Wolfhound dog is the tallest but not the heaviest dog breed. His body structure is very close to that of the Greyhound.

When he is around his family, which he loves to, this dog is dignified, calmed, and responsive. He is always alert but he is not suspicious. This makes him a poor choice as a guard dog.

Caring for and Irish Wolfhound

Don´t let this dog´s size fool you, he is a pampered house dog. He does best in a house without stairs as they can hurt his joints as he uses them. They require a large fenced yard and 20 minutes of playing and exercising.  You can also take them for a walk. But don´t take them for walks as puppies until they are at least six months old.

This dog is very sensitive so make sure you use positive reinforcements such as petting and food rewarding. Harsh training with physical violence will shut him down. In general, he should not be a problem training.

Don´t forget to visit us here in Dogalize to learn more about other amazing dog breeds.  We also have lots of information and resources for you to check out.