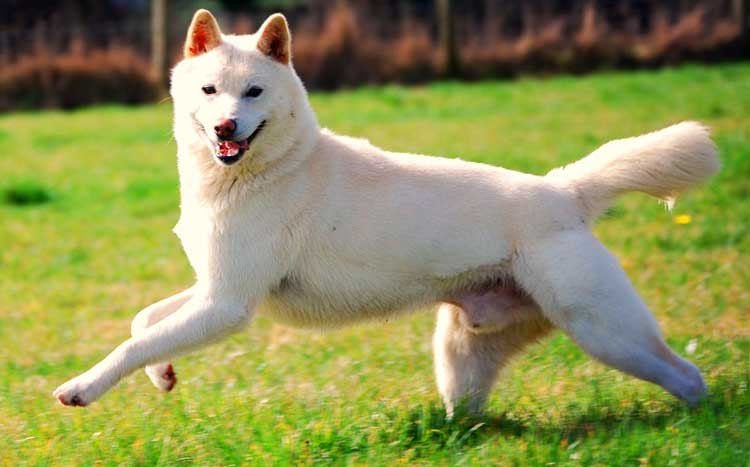 Straight from South Korea, the Korean Jindo dog is one with a loyalty like no other.  This dog requires a family that can meet his lively and active nature.  He is incredibly intelligent and fit for hunting and agility sports.

This dog breed is original from Jindo Island in South Korea, brought by Korean expatriates to America.  Unfortunately, there is no written record of the origin of the Jindo.  Mere speculations state that he may have descended from the Mongolian dogs brought to Korea during the Mongol invasion during 1270 A.D.

There is evidence that the Korean Jindo dog has been in Korea for at least 1500 years. They are very difficult to find outside of Korea since in 1962 they were designated as the 53rd National Treasure of that country. Despite this, a sample of the breed appeared in the United States in the 1980s.  The AKC recorded the Jindo in the Foundation Stock Registry in 2008.

These spitz-type dogs have a double coat. The breed exhibits sexual dimorphism with females having more angular heads than males.  Jindo owners have divided the Jindo into two body types:

This dog is highly loyal and intelligent.  Their personality makes them demand respect before giving away any loyalty.  But once this is achieved, the Korean Jingo dog is loyal like no other.

Caring for a Korean Jindo dog

These dogs do not do well if left alone.  They love their humans so they must be kept close to their owners. Once there is mutual love and respect, the deep bonds they form with humans turn into unconditional loyalty.

Their high intelligence makes the Korean Jindo dog a challenge to train during early stages.  However, take advantage of their pack mentality and eagerness to please.

Here in Dogalize we can help you take good care of your dog.  Our amazing resources are built to make your life and your dog´s easier.  Follow us for more information.