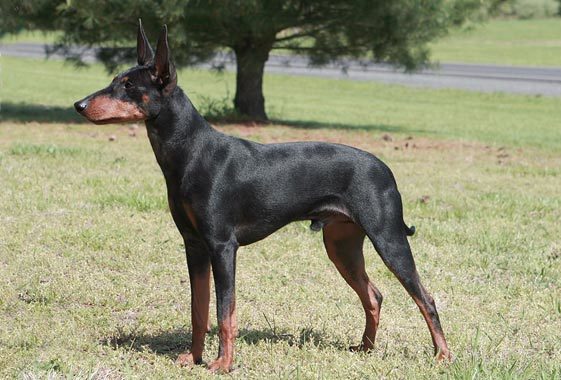 The Manchester Terrier dog was bred in Manchester England for the purpose of killing rats and coursing rabbits.  This dog has a strong personality with a loyal heart and watchdog abilities.

Many people look at the Manchester Terrier dog and think of a small Doberman.  Also, many people believe that they are the oldest Terriers.  In the early 1800s, England was going through sanitary difficulties with rats threatening public health.  Rat hunting was a popular sport and John Hulme apparently crossed a Whippet with a black and tan Terrier.

The sport was banned but the need for rat killing remained in public inns.  The British Manchester Terrier Dog was formed in 1937.  When the breed almost became extinct in WWII, its members were fundamental to saving it.

The Manchester Terrier dog has a characteristic black and tan color. They are slightly longer than they are tall.  Their bodies are compact, muscular, and smooth.  They exhibit great power and ability, as belongs to them being vermin hunters.

The Toy Manchester Terrier is less than 12 pounds in weight.  The standard weighs between 12 and 22 pounds.

This dog wants nothing else but to spend time with you.  He is very adoring of his people and likes to be with them.  He was bred to kill small animals so it is not a good idea to have him in the same house with rats and rabbits.  This Terrier is feisty, clever, willful, and bossy.

Caring for a Manchester Terrier dog

The Manchester Terrier dog needs daily exercise and some mental stimulation, at least half hour per day.  If you let this one outside in the backyard by himself, he will be knocking on your door for you to let him back in.  These dogs are happier when they are close to you.

Because of his nature, it is imperative to train this dog early.  These dogs have the nature of being the predator so you must become the leader he needs.  Train him in obedience at an early age.  Be consistent because Manchesters have a mind of their own and are stubborn.

Visit us here in Dogalize to learn more about other breeds of dogs.  We also have information and plenty of resources for you to check out.  Contact us if you have any question.