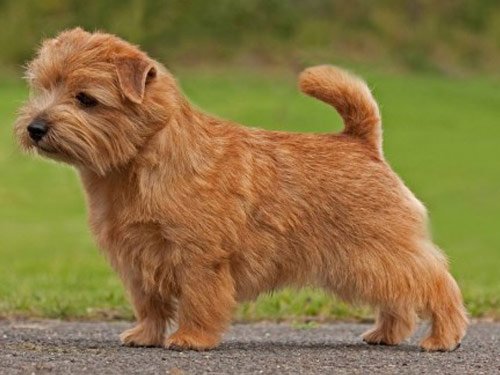 The Norfolk Terrier dog has the heart of a working dog.  He is alert, vivacious, playful, and a great companion.  He is a big dog in the boy of a small one.

The one thing that would tell a Norfolk Terrier and the Norwich Terrier was the ears; dropped in the Norfolk and pricked on the Norwich.  They were both bred to hunt vermin in farms and homes.

The development of the Norfolk began in the early 1800s near the towns of Norwich and Norfolk.  Many people believe he is the result of crossing Irish, Cairn, and Border Terriers.  They, later on, became very popular ratters and students at Cambridge brought them to control their rat problems.

Throughout history, breeders interbred the Norfolk and the Norwich in order to control the ear shape.  In September 1964, the England´s Kennel Club allowed the separation of both into two different breeds.  The AKC officially recognized the Norfolk Terrier Dog a breed in 1979.

The coat of the Norfolk is wire-haired.  Standards allow this coat to be “all shades of red, wheaten, black and tan, or grizzle.”  Their body is compact with a good substance and strong bones.  They are the smallest of the working Terriers.

Their bodies are moderately proportional.  If a dog is too heavy, he would not be too agile.  If he is too refined, that would make him a toy dog.  Ideally, their height should be 9 to 11 inches and with a weight of 11 to 12 pounds.

The Norfolk Terrier dog is alert, always playful, vivacious, and good natured.  He is not one to be sitting down if there is something fun to do.  He has endless energy and that can be tiring for you.  As a Terrier, he is prone to digging and barking.  This plucky little fella will be a delight to Terrier lovers who can keep up with him.

Caring for a Norfolk Terrier dog

Caring for a Norfolk Terrier dog should not be too difficult.  He is well-suited for apartment life.  He needs two 10 to 15 minutes of walking or a 20- to 30-minute walk.

His independent nature and intelligence sometimes make this dog hard to train.  Be firm and consistent with positive reinforcements.  Don´t be harsh or physical with this dog as he is sensitive and will learn to fear you.

Visit us here in Dogalize to get the best tips and tricks on taking care of your best friend.  We have amazing resources and information for you to check out.