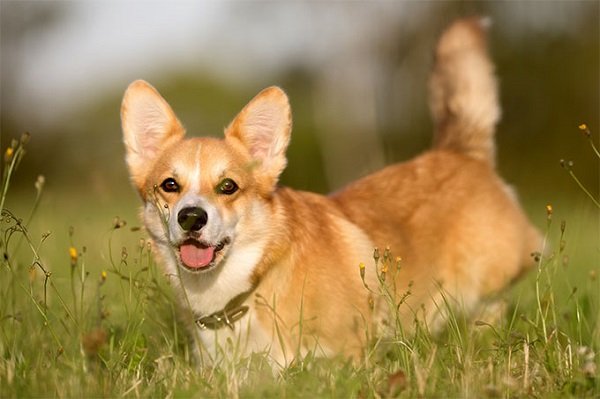 The Pembroke Welsh Corgi dog is an energetic dog that loves to play and is great with children. He is an active and intelligent dog and comes in different colors and markings.

This beautiful dog originated in Pembrokeshire, Wales and is part of the place’s folklore. According to Welsh legend, this dog was born in the lairs of elves and fairies.
The Pembroke Welsh Corgi dog is a descendant of the Vallhunds, dogs brought by the Vikings during the 9th and 10th century. But others believe that they are descendants of a line of dogs brought to Wales by Flemish weavers during the 12th century.

Pembrokes have grown in popularity in the United States, presently ranking 18th most popular dog. The AKC recognized the breed in 1934.

The erect ears of the Pembroke Welsh Corgi dog are proportionate to the size of his head. The head is foxy in appearance. There are lighter marks on either side of the withers; these are the “saddles” of the fairies who would mount them.

The tail of the Pembroke is naturally short or missing. Artificial tail docking is usually done to meet the standards. The height of these dogs is between 10 and 12 inches tall and are less than 30 pounds in weight.

These dogs love their families and are happy and intelligent. Whenever they feel a stranger might invade their territory, they will bark loud. This makes them great watch dogs.

The Pembroke Welsh Corgi dog was bred for work and as such has a lot of energy. If they get the proper amount of exercise, they can be kept in an apartment.
Don´t expect these dogs to jump from place to place. He should remain calm and not hop from one place to the other due to how low the back is.

Training is fairly easy due to their need to satisfy people. However, they can be stubborn and get away with it. They are fairly independent and with a mind of their own, which can get him killed.

Visit us here in Dogalize to learn more about other breeds. We also have an impressive amount of information for you and your dog. Stay in touch to learn more.