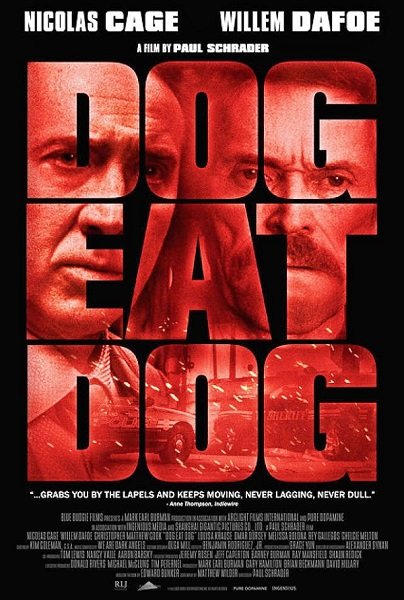 Dog eat Dog is a black comedy thriller directed by Paul Schrader. The film stars Nicolas Cage and Willem Dafoe. It tells the story of a crew of ex-cons hired by a Mafioso from Cleveland to kidnap a baby, belonging to a rival.

The movie is based on the 1995 novel of the same name.

Three convicted felons regain their liberty. They are all committed to adapting to their new civilian life.  Troy (Cage) is a mastermind. He really wants to set things straight with his life but he finds himself continually getting disappointed by the system. Diesel, played by Cristopher Matthew Cook is one who makes jobs for the mafia and his care for his suburban home and wife are in decline.

Mad Dog (Dafoe) is the one who has lost it and is constantly fighting with his demons, getting himself in trouble after trouble. Troy, being the mastermind, creates the perfect crime but the consequences of it keep having them facing the Law.

To start straightening up their life, they find out they are in need of some dough and their first juicy job lands on their feet. El Greco, a well-connected friend of them introduces to the drug lord Chepe, who hires them to kidnap a baby and demand ransom.

The film takes on about the adventures the main characters go through to achieve their assignment.

During the 2016 Cannes Film Festival, this movie was the closing entry for the Director’s Fortnight section.

The film did not receive very good comments. It has a score of 46% on Rotten Tomatoes.  The critics’ consensus is: “Dog Eat Dog’s refreshing bundle of quirks and surfeit of visual style aren’t quite enough to compensate for an aimlessly forgettable story.”

Don´t forget to visit us here in Dogalize. We have great resources to offer you in everything related to dogs. Get in touch with us if you need any help.