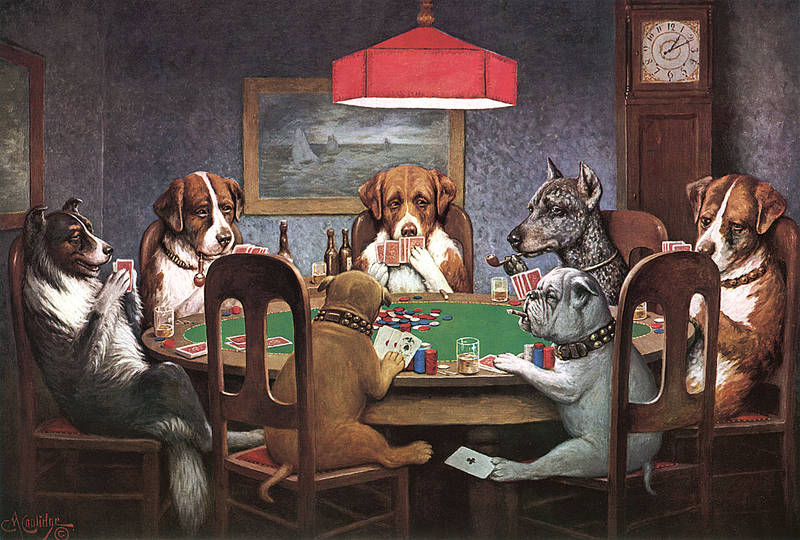 You saw it at one of your father´s friends house. Or maybe it was in your house’s living room. Maybe on a towel or framed. You know that Dogs Playing Poker is a painting you saw somewhere at some point in your life. In fact, the memory of it probably brings in some nostalgic twitch.

But, if you have not even heard anything about it, we are more than happy to explain. Dogs Playing Poker is the collective name of 16 oil paintings from 1894 and a 1910 painting by Cassius Marcellus Coolidge. The painting features anthropomorphized dogs around tables playing poker.

Coolidge made these paintings as a hire job from Brown & Bigelow, to promote cigarettes. There are eighteen paintings in the series in total. Probably the most well-known are the eleven where dogs are sitting around a card table. The reason for this is that they were used to portrait American working class taste in home decoration.

Coolidge’s painting from 1894 is called Poker Game. Some of the paintings from the series are modeled on other paintings featuring humans.

Recently, some of the paintings in the series have been auctioned and sold at pretty high prices. For instance, 1894’s Poker Game was sold at $658,000, making it the most expensive Coolidge painting to date.

As we mentioned at the beginning, you have probably seen any of the Dogs Playing Poker paintings at some point in your life. But if not, you probably have seen them on TV, movies, cartoons, musical records, and even video games.

The Dogs Playing Poker has been portrayed in many popular culture situations. The animated show The Simpsons has made many references to the paintings. The video game Indiana Jones and the Last Crusade feature one of the paintings hanging on the wall.

Here in Dogalize we probably have two or three of these paintings hanging on the walls. We invite you to explore and check out all the amazing resources we have for you and your pet.