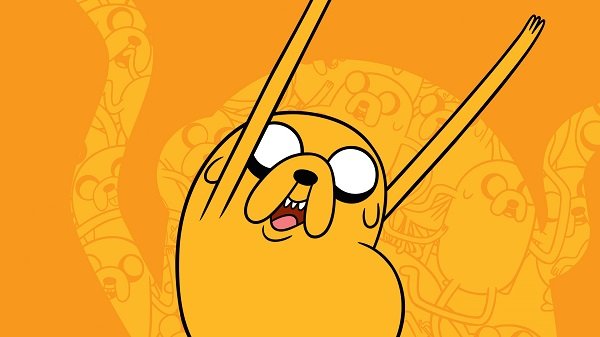 Jake the Dog is one of the main characters in the American animated series Adventure Time.  Jake is Finn the Human’s best friend and co-star.  They are also adoptive brothers.  Just like Adventure Time, Jake has enjoyed good reception among fans.

About Jake the Dog

Jake the Dog is a shape-shifting dog aged 30 in “magical years”.  He was conceived by Joshua and an extra-dimensional creature.  This give Jake the ability to stretch, shrink, or mold any part of his body.

This trait allows him to help his brother go on crazy adventures and be effective in combat.  Other times, Jake takes advantage of his special abilities only for the joy of it.

Jake the Dog is usually laid back. He is Finn’s advisor and confidant but will also provide questionable advice.  He is easy going, funny, loyal, and supportive.  Whenever Finn feels disheartened, Jake is always there to give advice.  But this advice can sometimes be nonsense.

Jake is probably dyslexic as seen in one episode where he was writing backward on a letter to Finn.  He also loves to eat and is willing to try new things.   Junk food is some of his favorite foods but he has stated that chocolate or fudge would probably kill him, just like a normal dog.  In some episodes, he is eating chocolate so there goes that.

Another condition that Jake might have is ADD.  He can easily forget about a conversation in a second and mention something else totally unrelated.

As much as he is a nice character, in some episodes, Jake’s dark side seems to surface.  He has been seen laughing devilishly or telling stories about how he used to steal purses and hawk stolen bikes.

Jake has the ability to stretch any part of his body any size, from gigantic to incredibly small.  Besides this, he can also rearrange his internal organs and teeth.  He can transform his limbs into weapons and entangle enemies with his stretchy arms.

Interestingly, his stretching ability is subject to the law of conservation of mass.  It has been shown that if Jake stretches too much he could become too dangerously thin, causing him to die.

It would certainly be cool to have a dog like Jake the Dog.  But your dog is pretty cool just the way he is.  Here in Dogalize we can help you take care of him the way he deserves.  Visit us to learn more.