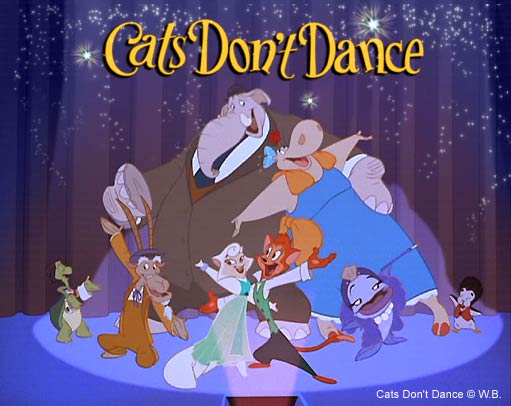 Cats don’t dance is an animated musical comedy released in 1997 by Warner Bros. Family Entertainment. It tells the story of Danny, a very optimistic cat that travels from his hometown to Hollywood to pursue an acting career.

The main plot of Cats Don’t Dance focuses on Danny, a cat that dreams of Hollywood stardom and travels from Kokoro, Indiana to Hollywood. When he lands there, he is given a role in a movie. He then discovers that his role in the film is minor and of little significance (actually he has a one-worded line: “meow”). Much to his dismay, he also discovers that animals are usually given thankless roles.

He then starts planning on getting animals bigger roles in films using several strategies. One of them was to assemble a massive amount of animals to perform in front of the humans.

While in the process, he meets several characters. He makes a new friend, a penguin called Pudge. His fellow actor on his first film, Sawyer. Characters Tillie, Cranston, Frances, and T.W. made him realize that humans are the ones given major roles in all movies.

Darla is a spoiled child, the star of the film, that will not allow Danny to rob her from stardom, so she continually plots ways to keep him under control.

The cast and crew of “Cats Don´t Dance”

The movie was written and directed by Mark Dindal. It was also written by Robert Lence, Brian McEntee, Rich Schneider, David Womersley, and Kelvin Yasuda.

The cast of main actors include:

We suggest you watch this animated musical with your family, especially if you are cat lovers. In Dogalize, we love cats as well. We have a lot of information and resources to help you become an even better cat owner.