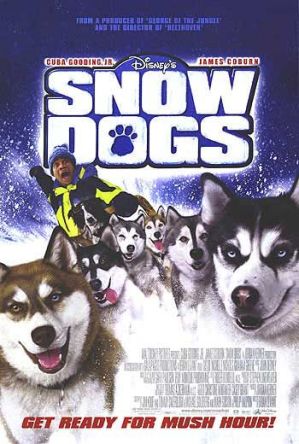 Snow Dogs, an adventure in Alaska

Snow Dogs is a Walt Disney film released in 2002. It tells the story of Ted, a dentist based in Miami, who receives an inheritance from a woman named Lucy. The film features Cuba Gooding Jr. and James Coburn. It is directed by Brian Levant.

Theodore “Ted” Brooks is a very successful dentist in Miami. At some point in his life, he receives a notification that his biological mother, Lucy Watkins (which he knew nothing about), has passed away and left an inheritance. His mother Amelia reveals that he is adopted.

Ted travels to Tolketna, Alaska to learn that he has inherited seven Siberian Huskies and one Border Collie named Nana. Once he is there, he tries to find out more about his mother and how he ended up being adopted. He meets Barb, owner of a bar who offers to help him train the dogs and falls in love with him.

The story shows how Ted, out of his element, discovers his roots and learns how to race the sleigh dogs. He meets his biological father, Thunder Jack, who promises to reveal the whole truth in exchange for the dogs.

The film, released on January 18, 2002, in the United States by Walt Disney Pictures did not receive many good reviews. It has a 24% in Rotten Tomatoes from 82 reviews. “A mediocre live-action children’s movie, Snow Dogs is filled with cliched dialogue, tiresome pratfalls, and stale fish-out-of-water jokes.”

It has a score of 5.1/10 in IMDB. The film made an estimated $115 million worldwide which is not bad considering that the budget was $33 million.

The animals in Snow Dogs

Now we get to our favorite part of the movie, the animals. A total of ten dogs, one grizzly bear, a skunk, and a fox. The Border Collie, Nana, was played by Fly and she had a stunt double named Dash. Demon is the antagonistic dog played by Don Juan/DJ and Cody as a stunt double.

If you would like to know more about dogs and how to take better care of your pet, please follow us here in Dogalize. We have everything you need to know about dogs. Visit us and check out all the information and resources we have for you.