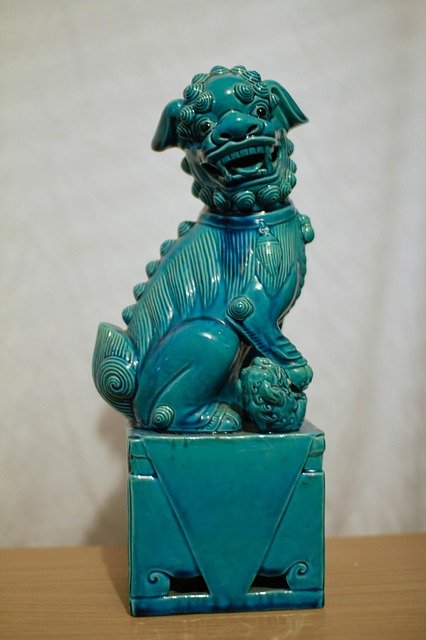 A Foo Dog is the name given in the West to traditional statues of Chinese Guardian Lions. To our defense, though, they do look like dogs. In fact, we use them to decorate entrances and even indoors. Still, they look like dogs.

In fact, there are some breeds that seem to be able to depict a foo dog pretty well: Chow Chow, Pug, French Bulldog, Shar Pei, Shih-Tzu, Pekingese, and the Tibetan Spaniel all resemble one.

A Foo Dog represents a rich and cultural history belonging to China. Foo Dogs are the Chinese guardian lions that have protected palaces, temples, tombs, and homes of the wealthy.

The first time Foo Dogs make their appearance in history is probably during the Han Dynasty. Several stories of lions brought in as Imperial tributes from Central Asia can be found in the Book of the Later Han, written from 25-220 CE.

Lions in Buddhist culture were always depicted as the protector of Dharma. In Hinduism the are associated with gods and goddesses. The idea of foo dogs originated in Chinese Buddhism. It then spread to other parts of Asia: Japan, Korea, Tibet, Thailand, Burma, Vietnam, Sri Lanka, Nepal, Cambodia, and Laos.

Uses of Foo Dog term in the West

In the Western Culture, we name them according to the language spoken. They have a ton of names, such as Foo Dogs, Fu Dogs, Fo Lions, Fo Lions, Fu Lions, and Lion Dogs.

The statue of a foo dog is carved from decorative stone, bronze, iron, marble, or granite. These materials are pretty expensive and the detail represents hard working. Therefore, traditionally the statues were reserved for the wealthy.

Here in Dogalize we also believe that you have to protect your dog. We have tons of information and amazing resources to help you become the pet owner your dog deserves.