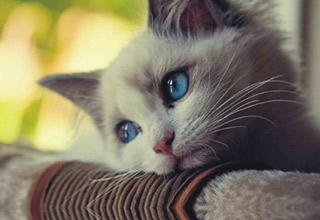 Cat scratch disease is a bacterial infectious disease caused by the bacterium Bartonella.  It is more common in younger children following a scratch from an infected cat.

The cause of the disease in humans is Bartonella henselae, an intracellular Gram-negative bacterium.

Robert Deré recognized the cat as the natural reservoir of the bacteria in 1950.  Since kittens are more likely to carry the disease in their blood, they have a higher probability of passing on the disease.

The B. henselae can be transmitted among cats through fleas and ticks.  The most probable form of transmission from animal to human is through the inoculation with infected nails or saliva, through biting.

Other animals bites can cause cat scratch disease, not only cats.  Recently, scientists have discovered that spiders can pass on the bacterium.

The first symptoms of cat scratch disease usually appear within two to three weeks.  The first signs are tender and swollen lymph nodes in the area of the scratch.  This is known as lymphadenopathy and usually happens in the neck, arms, or jaw.

In very rare situations, this infection can turn into something worse, such as encephalopathy, seizures, meningoencephalitis, or endocarditis.  When a patient gets the infection, this usually compromises his immune system.  Basically, this makes them vulnerable to other infections caused by B. henselae and B. quintana.

Most people clear out of the infection by themselves, usually within a month.  However, there is a 5 to 14% of patients that might see complications due to the organism spreading to the liver, eye, spleen, or central nervous system.

When a person is diagnosed, even though experts recommend not treating CSD in immunocompetent patients, antimicrobial agents (Grade 2B) treatment is suggested to avoid any spreading of the disease to important organs.  The most widely used agent is azithromycin.

Dogalize is concerned with your health and the health of your cat.  We recommend periodic veterinary checks to verify that your feline friend stays healthy.  Visit us and check out our interactive map that connects you with the closest veterinarian to you.