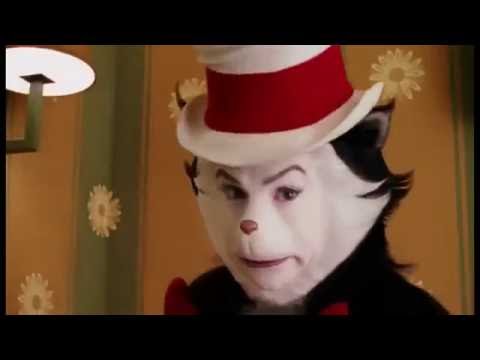 Cat in the Hat Movie

From the genius of Dr. Seuss, The Cat in the Hat, comes a film for the entire family: The Cat in the Hat movie.  The film tells the story of how the lives of two pretty bored kids is turned around when a talking cat shows up to their house.

The story centers on two siblings, Conrad and Sally Walden, who live with their mother, Joan Walden in the city of Anville.  Joan is dating Larry Quinn, their next-door neighbor, to much of Conrad’s dismay.  Larry is always on the lookout for Conrad’s mischief to find a good reason for sending him to military school, as he is described as “hot-headed trouble-maker” while his sister is “perfect and well-behaved”.

When their mother leaves, Conrad and Sally meet a humanoid, large cat in a hat in their house.  This cat makes all types of crazy things, including making cupcakes that explode.  While at this, he releases two trouble-making creatures called Thing 1 and Thing 2 from a crate that he tells is from another world.

Adventure ensues when Larry King turns out to be a failure with fake teeth, destroying the Walden house in the process, which the kids make sure Joan does not see.

The Book it Was Based On

The Cat in the Hat movies is based on Dr. Seuss’s title of the same name.  The book was first published in 1957 and tells the story of a tall anthropomorphic cat wearing a red and white striped hat and a red bow tie.

In the book, the cat shows up and insists on showing them some of this tricks, despite the children telling him not to.  This wrecks the house apart, but right before mom comes in, he cleans the house and says his goodbyes.

The main cast and characters in the Cat in the Hat movie are:

The film did not receive very good reviews.  Rotten Tomatoes gave it a score of 10%, from 158 critics.  It has an IMDB score of 3.8/10.  Mike Myers stated during an interview that he was expecting a sequel, just like in the book.  The book it was going to be based on is The Cat in the Hat Comes Back.  But in February 2004, Audrey Geisel, Dr. Seuss’s widow decide not to allow any further live adaptations of any of his late husband’s works.

Stay with us here in Dogalize to check out all the resources we also have for your cat.  We have tons of resources to help you become the owner your cat deserves.