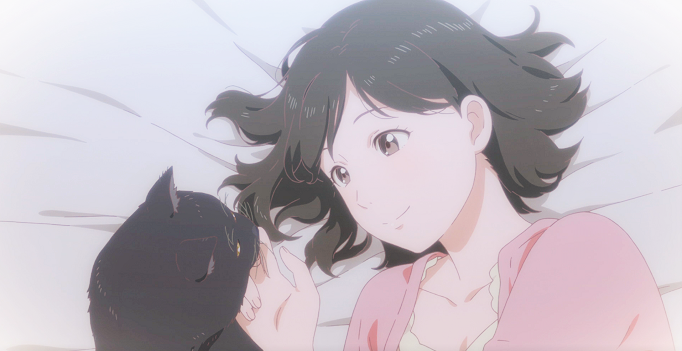 She and Her Cat

She and Her Cat is a five-minute Japanese animation created and directed by Makoto Shinkai in 1999.  In English, the story is subtitled “Their Standing Points” and it tells the story of the relationship between a male cat and his female owner, from the cat´s perspective.

The writer and director, Makoto Shinkai, also provides the voice of the cat.  At the time he started creating the story in 1998, he decided to use black and white since he knew that colored would take three times the space and the process would be longer.  Most of the work was done by Shinkai, but the used the help of three collaborators, Mika Shinohara, the voice of She and helped with some illustrations and two other people who were credited for their cooperation.

She and Her Cat, which also goes by the name Kanojo to Kanojo no Neko, was adapted into an anime television series and a manga in 2016.  The original story takes place within the span of a year.

She finds Chobi outside on a rainy Spring day and brings him in.  Chobi is happy with his new owner as she is kind and beautiful.  In the Summer, Chobi gets a girlfriend called Mimi. Mimi loves Chobi and wants to marry him but Chobi is in love with Her.

One day in Autumn, She has a long conversation on the phone, after which she spends days crying.  Chobi does not understand what the conversation was about and with who.  But he stays by Her side.  Eventually, she gets over the whole situation and Her life gets back to normal. Chobi stays by her side.

There are basically three characters in the entire film.

We know that you love your cat the way your cat loves you, or the way Chobi loved Her in She and Her Cat.  Your kittie is waiting for you to show your love so take good care of her.

In Dogalize, we want you to have the best love story with your furry friend.  This is why we have lots of information and resources to help you out.  Visit us and check out everything we have for you and your cat.