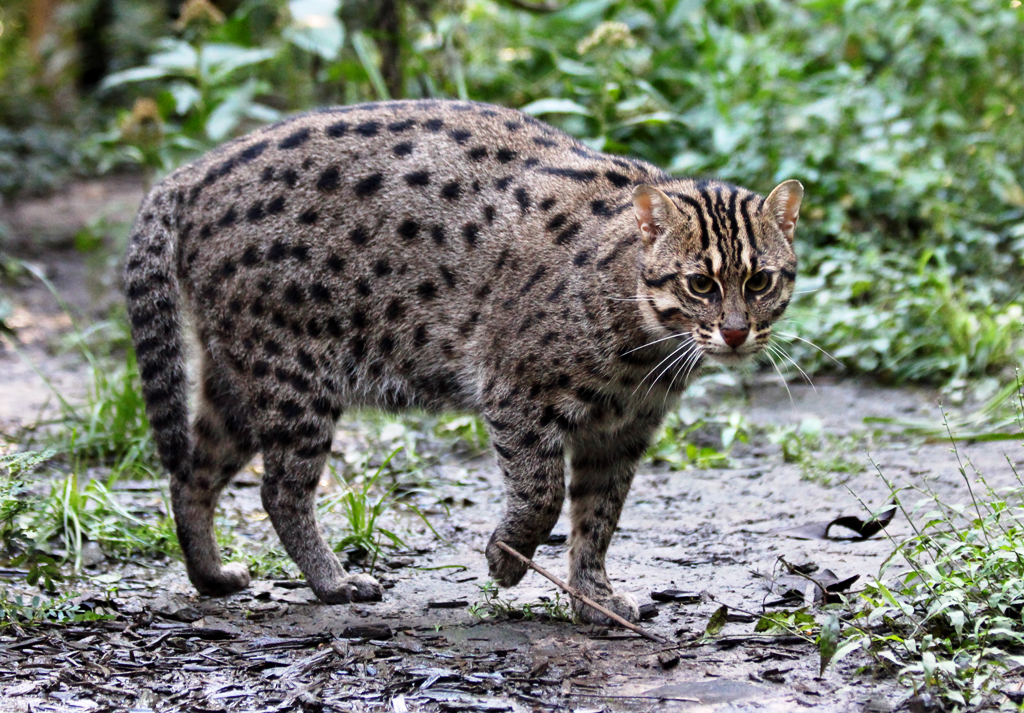 The Fishing Cat (Prionailurus viverrinus) is an endangered species belonging to the Felidae family. It is original from the Sout and Southeast Asia. Larger than a domestics cat, it gets its name from its primary prey, fish.

The coat of the Fishing Cat is grizzled-gray with olive-brown sporting spots and stripes that make it very distinct. This coat is camouflaged which is useful when it comes to hunting.

Their bodies are larger than that of a domestic cat. Their chest is deep and their legs are short. The head is big and broad in relation to the body. The tail is less than half the length of his head and body.

Probably the most important feature of the Fishing Cat is the structure of his fur, which allows him to easily adapt to life in the water. The undercoat is so dense that water cannot go through it.

These cats are distributed all around South East Asia, Northern India, and Sri Lanka. Their main habitat is the wetlands, which are being degraded, converted and settled. This has caused its classification as a vulnerable species.

Other types of habitat where these cats are typically found include mangrove swamps, marshy thickets, and areas along river and streams with a thick vegetation.

Othe places where Fishing Cats have been spotted but in a scarce amount include the Island of Java, a Nepal National Park that found that they only active at night, and Cambodia, where they were discovered in 2009.

These felines are good at their job of fishing. They have to if they want to survive.  Against all beliefs that cats hate water, these ones are strong swimmers and can cover great distances swimming alone.

They catch fish by flicking them with their paws and by plunging their heads into the water. Studies have revealed that 76% of his diet is made of fish, with some insects, rodents, and birds included.

The Fishing Cat is a night feline. Most of his behavior in the wild is not so well known.

In Dogalize we do know a lot about your domestic cat. In fact, we have plenty of resources to help you give your best to your feline friend. Visit us to learn more.