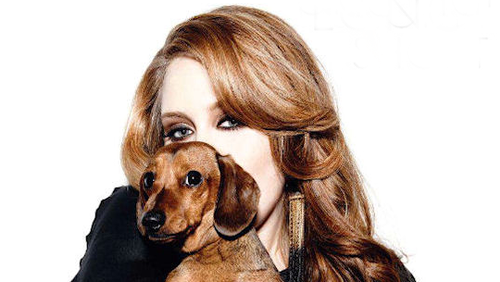 Adele is today one of the hugest stars in the celebrity universe. She is a superstar, ten times Grammy-winner, and a sucker for her dogs. Today we briefly share with you the story of her and her beloved pooches.

Atilla was Adele’s beloved pet. We say “was” because Atilla passed away in June last year. Atilla was a miniature pinscher and actually belonged to her boyfriend Simon Konecki.  But she had lived with the pet for six years, so they became pretty close.

Atilla loved her and her loved Atilla. When Atilla passed away in 2016, after 17 years of happiness, Adele was greatly affected. She felt so sorry that she dedicated her Chicago concert to him.

On stage, she almost cried at the memory of the recently late dog and said that he would live in her heart forever. With tears in her eyes and flowing with emotions, Adele dedicated the song “One and Only” to her gone pet. The audience could sense the sadness and frustration of the artist due to this sorrowful event.

Adele’s new man is a German guy. Louie is a Dachshund that came to Adele’s life in 2009.  When Louie was born, the singer attended a Britney Spears concert at the O2 in London. She then decided to call him Britney. The fact that this was a boy did not seem to bother Adele at all.

The idea only lasted a few hours as she came to her senses, and when the hangover was over, as she said. The star even considered calling him Aaron Lenon after one of her favorite soccer players.

But then she heard the pup howling to a Louise Armstrong records, she knew that his name would be Louie.

Stay with us here in Dogalize to hear about other celebrities and their celebrity pets. We also have a lot of information and resources for you to check out. Visit us to learn more.