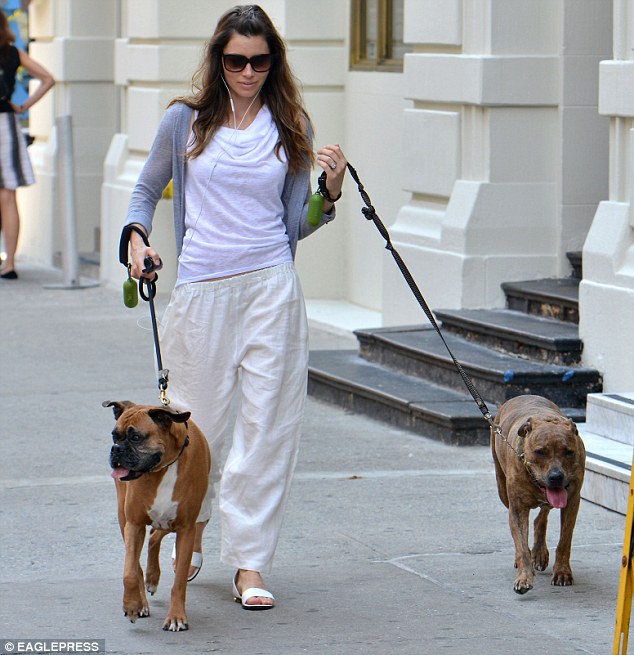 It is not uncommon to see Jessica Biel walk her dogs around Hollywood. There are always paparazzi documenting her every move, after all. We have seen her walking around with her Pitbull Tina or one of her boxers, Buckley or Brennan.

Jessica Biel is presently married to Justin Timberlake since 2012. They have one son named Silas Randal Timberlake, who was born in 2015. The couple has had several dogs.

Whatever pet comes into the Timberlake family will be shown much love and affection.  Jessica is seen walking in town with one or two dogs with her. She likes to take a brisk walk around the city and takes one or two of this pooches to guard her.

There seems to be no doubt that Jessica Biel has a favorite and that is her Pitbull, Tina.  The actress from “The Texas Chainsaw Massacre” simply loves to take her for a walk.

But this is not all. How do we know that Tina is her favorite pet? That is easy. All you have to do is check out Biel’s Instagram and you will see the tons of pictures where Tina appears.

One can even think that there are more pictures of Tina than Jessica herself in her Instagram photo album. She has become Jessica’s little girl and faithful companion.

Unlike other celebrities when they walk their dogs, Jessica does not usually dress up but is usually wearing loose clothes which probably make her feel comfortable. She takes the opportunity of walking his dog to make some exercise herself.

Way back in 2013, one year after marrying Justin Timberlake, Jessica was photographed walking her Pitbull Tina and one of her Boxers, which could have been Buckley or Brennan.

But what called people’s attention was a dog shock collar remote control. This generated some controversy around Biel, especially from those that consider that using a shock collar is abusive.

We greet Jessica Biel for taking the time to walk her dogs. How are you exercising your own dogs? Here in Dogalize, we have plenty of resources, information, tips, and tricks for you to learn how to better take care of your best friend. Visit us to learn more.