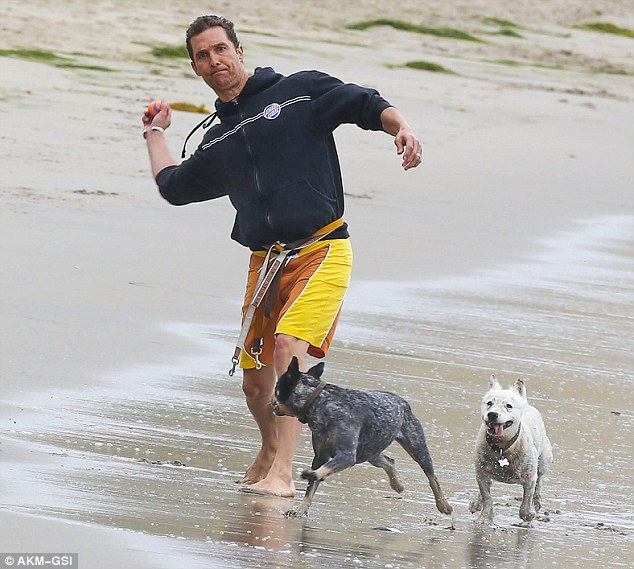 Matthew McConaughey is an actor, director, writer, producer, and animal lover. In countless occasions, we have seen him vouching for animals and protecting them.

One time, while walking in LA, he saw the company of strong guys mocking a cat and about to torture him by throwing him on fire. He was in such rage and rescued the cat.

The actor cannot conceive somebody adopting a dog and just putting them in a corner to their own. They are not stuffed animals that you can just place on a shelf and forget about them. They are living things capable of feeling happiness, sadness, joy, and loneliness.


Matthew McConaughey and His Dogs

Matthew has always been an animal lover. In 2005, he suffered the death of his 12-year old Labrador–Chow mix, Ms Hud. The pooch died of cancer and Matthew was shocked. Matthew McConaughey had picked her up from a pound in 1993.

Ms Hud’s front leg had been amputated and then McConaughey learned that Ms Hud’s both back legs were also riddled with cancer. In an interview with Oprah, he said, “She and I looked at each other and I said, ‘Miss Hud, do you wanna be a one-legged dog?’ And she looks up and she says, ‘Let me move on, Pop.’ So we let her move on.”

Matthew and Ms Hud were very close and went everywhere together. For a long time, he did not want to get a replacement for Ms Hud. But then he realized that Ms Hud had a great life with him and his family so he decided to give other dogs that same opportunity.

This is how he gave shelter to a new pup, Foxy. Then came the second one, Bigi, who also joins Matthew in his morning runs. Bigi was picked up by his wife Camila in August 2012.

After Hurrican Katrina, Matthew realized that people and animals needed to be rescued.  So he joined the efforts despite it being dangerous. He helped to the rescuer of over 50 animals from the aftermath.

This dog rescuer is also a supporter of the Mississippi Animal Rescue League.

Here in Dogalize we love dogs as much as you and Matthew McConaughey. We have amazing tips and tricks to help you keep your best friend in the best shape possible. Visit us and check out what we have in store for you and your pooch.