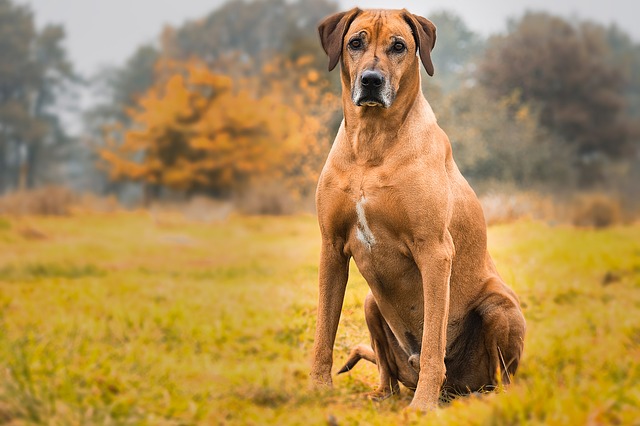 The Rhodesian Ridgeback dog was created in Africa to be a hard-working hunter and house guard. Today, he is a great house pet who is smart but sometimes stubborn.

More specifically, the Rhodesian Ridgeback dog was developed in South Africa by the Boer farmers. They were in need of a dog that was strong enough to endure harsh weather and the tough terrain of the woods.

The first step to creating this strong and versatile dog was to cross this half-wild dog kept by the Khoikhoi with other dog breeds they had brought from Europe, including Mastiffs, Great Danes, Bloodhounds, and Greyhounds.

Breeders soon noticed that breeds crossed from this wild dog had a ridge on their back. People then related this trait to its ability to run pretty fast.

The dog was introduced to the United States in 1911. The AKC officially recognized him as a new breed in 1955.

The most obvious personality of this dog, at simple sight, is the ridge on their backs. According to standards, the dog must be pure in one color, except maybe white hair on their chest and paws.

The Rhodesian is really smart and independent. He is also pretty stubborn when it comes to trying to get things.

They are typically intelligent, loyal, and a bit aloof of strangers. A Rhodesian Ridgeback dog is more on the ignoring side than the challenging one.

Caring for a Rhodesian Ridgeback Dog

These dogs can easily adapt to any environment, including apartment, as long as they are given daily exercise. They get bored easily so, besides having a strong and tall enough fence, make sure you also keep your Ridgeback entertained.

Due to his ability to pick up habits, it is important to provide enough exercise at an early age. This dog needs a firm hand and consistency. We do not recommend this dog for a first-time owner.

Take a look at everything we have for you here in Dogalize. We can help you decide what dog breed to go for and how to take better care of him. Visit us to learn more.