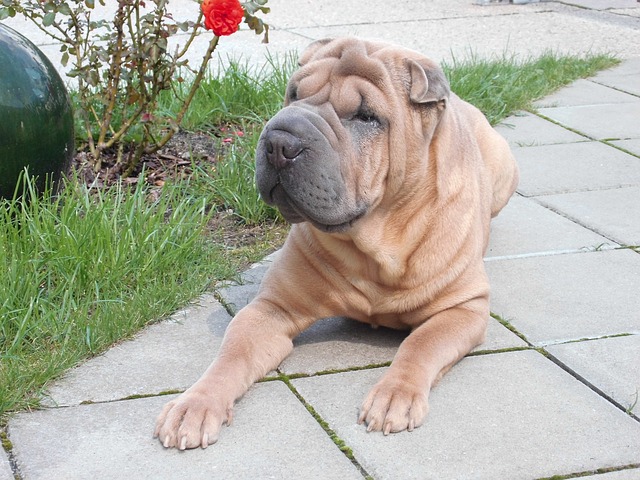 There is no way you can miss the Chinese Shar Pei if you come across one. This compact dog has characteristic triangular small ears, folded skin all around his head and neck, and those tiny eyes. This dog breed was initially created to hunt, guard, herd, and later on, to fight.

Despite being the 134th dog recognized by the AKC, the Shar-pei has been around for centuries. Since the Hans dynasty, apparently, to these days, this dog has well survived the pass of time.

It was in China and probably during the Han dynasty that this dog was relevant. This is around 200 BC.  Statues resembling the Shar Pei have been found dating the Hans dynasty. But some believe they are statues that resemble this dog.

The name “Shar Pei” literally is translated into “sand skin“, which is actually how you first perceive this dog.  The coat of the Shar-Pier is rough and with spikes.

The Shar pei Dog has a wrinkled very distinguishable trait which is the folded skin.    Their one distinctive trait that you take a look when he opens his mouth is the purple tongue.

This dog is altogether sweet and needy. He is independent and aloof of strangers. He can go for a walk by himself and then come back. Owner companion is fundamental to this dog as he loves.

He loves to be around his family inside the house. But he also makes a great guardian.

Caring for a Shar Pei

The Shar Pei loves the endless world of an open space. It is necessary to take them for a walk every day, especially if he wants some outside time. Yes, he does need a larger yard probably but some species will prefer the open side.

Due to him being stubborn, a mind o his own, training a Shar Pei is not fairly easy. He is not naturally friendly to other dogs so that is something to work with.  You must be consistent and firm so that he very clearly understands who is the leader of the pack.

In Dogalize we care about our pets as much as you do. This is why we have an extensive pile of information and resources for you to take advantage of it. Visit us to learn more.