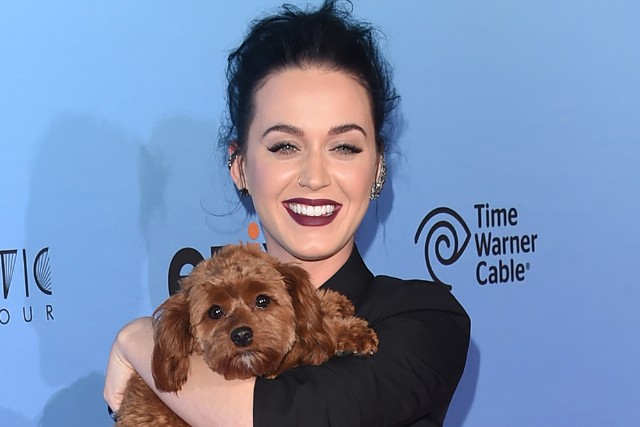 Katy Perry (Katheryn Elizabeth Hudson) is a huge pop star and she has many credentials to prove. The “I kissed a Girl” artist also has a great love for her dog Nugget.

This tiny teacup poodle is Katy’s adoration and has now made it to stardom by landing her own commercial. We guess that being Perry’s dog, your place is on the same pedestal.

Katy and Orlando were probably one of the cutest couples in Hollywood. But earlier this year and after dating for a year, the couple announced they were no longer together.

Fans were probably dishearted at the news but there is one thing that some noted. There was a dog that accompanied the couple, which we all thought was one dog. Now that they split, not only we are confirmed that they are two dogs, but people don’t seem to be able to tell them apart.

Bloom’s dog is a red poodle name Mighty and it looks a bit like Perry’s Nugget. The confusion is understandable since they were dating. But Nugget still enjoys Bloom’s company despite him and her mom no longer being together. You can’t blame Orlando for wanting to cuddle this pretty pup.

While Katy Perry is killing it on stage, her pooch is getting her feet soaked in the biz. The teacup poodle has a starring role in her mom’s last commercial for Citi’s Double Cash card.

In the ad, Katy and Nugget play themselves, and mom is taking pictures of her little princess.  We are guessing that Nugget is enjoying stardom and people recognizing her as much as Katy Perry. Greater things will come for this poodle.

In the meantime, she will still be getting lots of love from her mom and probably from Orlando Bloom.

In Dogalize we have tips and tricks to help you show your love to your best friends. We have information, resources, stories, testimonials, and much more. Come visit us and check out everything we have in store for you.