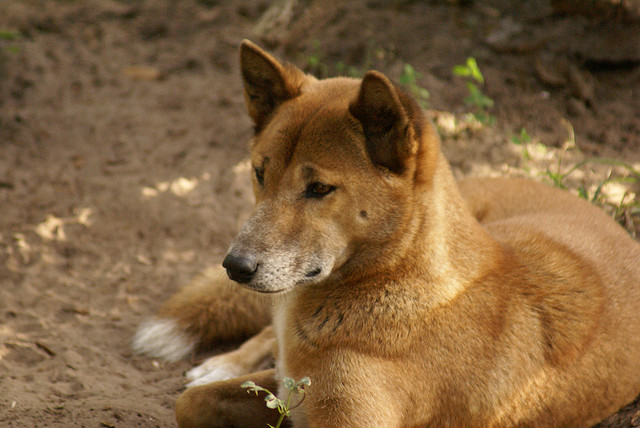 When it comes to rare dogs, the New Guinea Singing dog takes the big pot. To this day, there are only two pictures of sightings of this dog in the wild.

As its name suggests, the New Guinea Singing dog or New Guinea highland dog is native to the New Guinea Highlands of the island of New Guinea. It is a type of dog (Canis lupus dingo), characterized by its peculiar vocalization.

Some say that it is a wild dog but others disagree. Very little is known about these dogs in the wild.

This rare breed of dog was discovered in the 1950s in an expedition to the remote islands of New Guinea. The travelers discovered the dog and quickly noticed its peculiar howling.   In 1957, Sir Edward Hallstrom took the first dogs from the wild and brought to an Australian zoo. Most of the North American singing dogs today have descended from this couple. The first singers arrived to the US in 1958.

Also known as singers, there are only about 100 in captivity. Not only are they the rarest breed but they are also pretty primitive. This has earned them the name “stone age dog“. They were separated from domestic dogs as far as 3000 years ago.

The singing is actually a howl. They have this characteristic sound that is coyote-like. When they are in a pack, they can produce different pitches of howling. This makes a group of these dogs to sound like a chorus.

Thanks to their isolated habitat, these dogs have preserved their physical characteristics through millennia, making them no different from their ancestors. Even though they are rarely seen in the wild, their body build allows them to walk perfectly among trees and through the toughest of terrains.

The head and the teeth are the distinguishing traits of the New Guinea Singing dog. His wedge head is the widest part of his body. Their body is slim and pretty flexible, pretty cat-like. This flexibility allows them to rotate their head 360 degrees. Their double coat ranges in color from red to brown.

When it comes to taking care of this dog, it is best to assume he is a wild dog and is not suitable for domestic life. They should be kept in areas where they can jump and run.

Training this dog is like training a cat. They can obey simple commands and they learn them in their own terms. These dogs can take care of themselves, they are independent, and they do not play with other animals.

Here in Dogalize we have lots of information about many dog breeds, you should check them out.  But we also have a lot of information and resources that you can use for the benefit of your bet.  Visit us to learn more.