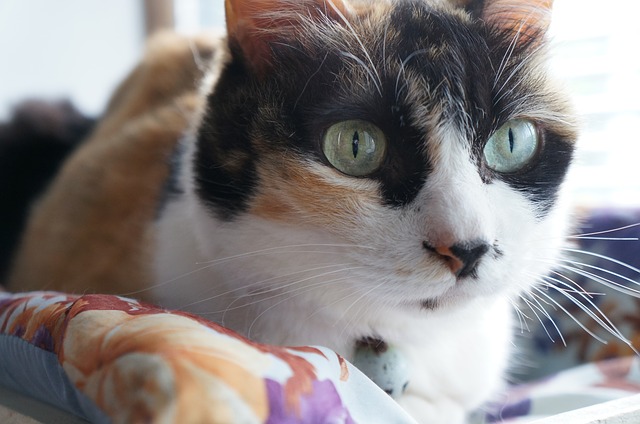 Calico cats are domestic cats that are predominantly white with a pattern of two other colors, usually black and orange. In many countries, this pattern is usually known as tortoiseshell-and-white. They also get other names depending on the geographic location.

Calico cats do not belong exclusively to one breed of cats neither does it determine any.  It happens incidentally in cats displaying a range of color patterns. There seems to be no known historical background to the pattern.

Neil Todd did make some studies that helped him determine the migration of certain cats along trading routes in Europe and Northern Africa. The gene responsible for the orange coloration was traced back to the Mediterranean area of Greece, France, Spain, Italy, originating from Egypt.

The genetics behind the causes of calico cats is rather fascinating. While we will not get deep into the mumbo-jumbo of genetic crossings, we will try to explain in an easily-understandable way.

In 1948, a guy named Murray Barr, noticed some dark masses in the nuclei of nerve cells in female cats. They did not find these drumstick-shaped masses in male cats. Eventually, these masses were known as Barr bodies.

In 1959, Susumu Ohno, a Japanese cell biologist determined that these “Barr bodies” were X chromosomes. In 1961, Mary-Lyon proposed that one of the X chromosomes in a female simply shuts off.  She called this X-inactivation.

A little High School biology:  two X chromosomes determine a female and an X and Y chromosome determine a male. This is true for all placental mammals.  It turns out that the gene that codifies for orange/non-orange is located in the X-chromosome.

When there is no color inhibition gene, which causes white coloration, it is the orange/not orange gene in this X chromosome that determines if the fur is orange or not. Male cats have a Y chromosome, which does not have any locus for the orange/non-orange gene.

Therefore, it is unlikely for an XY (male) to have both orange/non-orange genes together, which is what it takes for calico cats to be. In other words, almost all calico cats are female.

In Dogalize we have all the information and resources you need to keep a healthy cat.  Visit us and check out all the amazing resources we have in store for you.