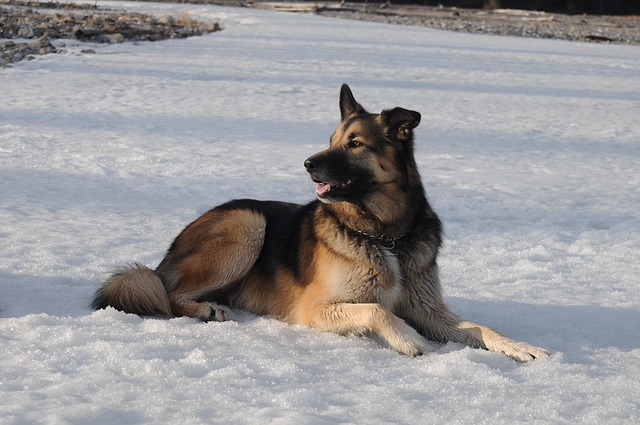 One of the most popular dogs out there, the German Shepherd dog is an intelligent and multi-faceted dog. His versatility allows him to excel in pretty much anything he is trained to do, from a therapy dog to a police officer searching for illegal substances.

When Germany became more industrialized, the need for herding decreased. Capt. Stephanitz then decided to have the dog work in the military and police. This is how they became service dogs during World War I.

Thanks to a dog called Rin Tin Tin, brought to America from WWI, the breed became very popular in the United States. Today he is the second most popular dog at the AKC.

These dogs can be medium to large in size. They are longer than they are tall. The standard height is 24 to 26 inches for males and 22 to 24 inches for females. Their average weight goes from 75 to 95 pounds.

The German Shepherd dog is a quite reserved dog, aloof but generally not aggressive. He is actually easy going and quite approachable. Despite not being good at making friends, once he does, he is highly loyal.

Caring for a German Shepherd Dog

This dog was trained as a herding dog, which means it is full of energy. Daily exercise is needed if you do not want to have a barking, boring dog. Inactivity and boredom are a door to disaster with this dog.

He also needs his mind to be challenged. They like to chew and will mostly destroy anything with their powerful jaws  Protect him and your belongings by giving him proper toys for him to chew on.

The German Shepherd dog is highly intelligent and is eager to please. This makes him very easy to train.

Visit us here in Dogalize to learn more about this breed and many more. We also have plenty of resources to help you raise your pet in the best way possible.