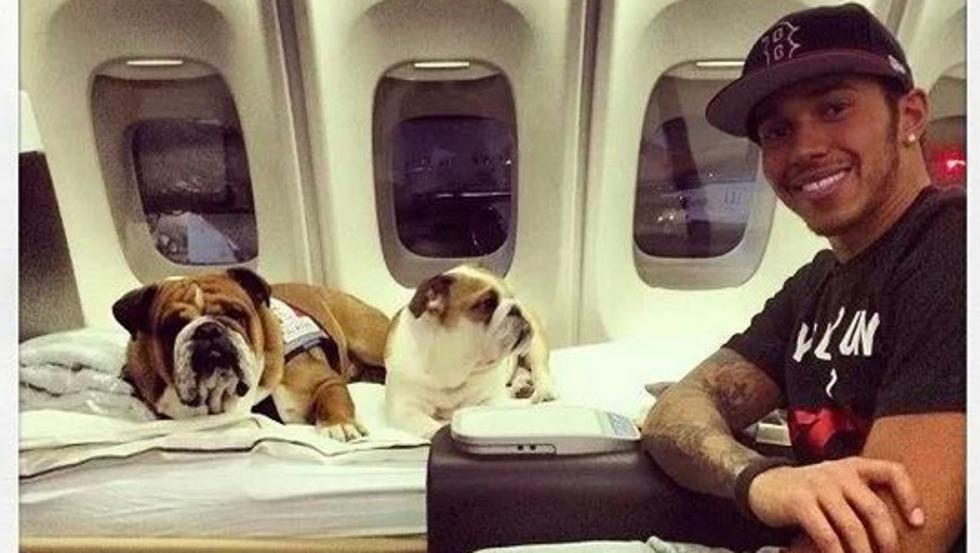 Lewis Hamilton, the F1 ace always finds the time to play with his two Bulldogs, Roscoe and Coco. This pair and their British owner really get on together.

Lewis Hamilton likes to share photos of his pooches on his Instagram account. He really enjoys spending quality time with them. Last year, he published a series of photos of them fully enjoying the winter snow before Christmas, during the off-season.

The Bulldogs, which are usually a dog breed that does not really enjoy cold weather, were clad in sweaters and taken out to the cold. They were less than impressed but once there, they set it off to run on the snow.


The Privileged Life of Roscoe and Coco

You think Roscoe and Coco have it easy? Well, we do not know that. But we do know that they have it sweet. Life is not that tough when your owner is the Mercedes AMG Petronas team racer.

Fans have been able to actually see the dogs attending the Formula 1 circuit. Even more, Roscoe became the first dog ever to attend a press briefing when Hamilton brought him for the F1 testing in Barcelona last year.

These dogs do not travel economy class, at all. They fly jet set on Hamilton’s private jet, which he acquired for $15 million in 2013. The plane has a pull-out bed, where the dogs get to doze off while their owner has to get to the destination.

Good Genes Should go On

On November 2016, Hamilton announced through the dogs’ Instagram account that, due to some complications, Roscoe had to get the snip.

“Roscoe in great spirits. Due to some complications, we had to have him snipped,” he posted.

“However, since he’s the best looking bulldog I decided to freeze his sperm so that in time to come I could have his pups.”

That is right, Hamilton froze the five-year-old’s sperm to have his puppies in the future, even when he will no longer be able to reproduce naturally.

We are at a loss for words to describe Lewis Hamilton and his love for his dogs.  Here in Dogalize, we know that you love your beautiful pooch as well. This is why we provide you updated information and tips on how to best take care of them. Love your dog the way he deserves. Visit us to learn more.