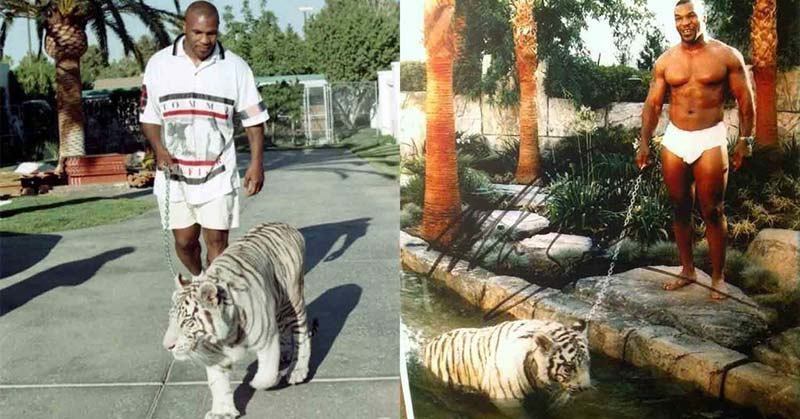 We all know the once boxing star, Mike Tyson. He killed it in the ring until he lost it right there too. How can we forget that legendary fight against Evander Hollifield that ended with the infamous ear bite?

Mike Tyson has a new-found career as a comedian and has been seen playing short roles in some motion pictures. Despite no longer putting on the gloves, he is still a legend.

One of the things that made Tyson somewhat eccentric was that he was the happy owner of three cats…err, tigers. These tigers were Mike’s pets. You can easily get good company from a beautiful shorthair.  But this is Mike Tyson and he had to make it big.

During the peak of his boxing career, Mike Tyson owned several big cats. He was always known for being proud of his exotic animals.

Very popular were his three Royal Bengal Tigers, one of them which you probably saw in the 2009 motion picture “The Hangover“.

Tyson acquired the tigers for $100,000 and he probably spent more than that a year feeding them as these animals can be between 300 and 400 pounds in weight.

Unfortunately for Tyson and especially the tigers, he did not have the proper license to own a tiger. So, they were taken from him and sent to a shelter in Colorado to spend the last of their days.

Now, having a cat or dog as a tiger is usually not a problem for a neighborhood. But owning wild animals as pets poses an issue and even a threat. This is why the ownership of these must be formally documented. Mike Tyson did not follow any of those steps.

In an interview in 2016, Tyson confessed that he misses his tigers and that he would love to have them back. However, given that you would need to spend at least $20,000 worth of food only per year, we can see how Mike Tyson has not ventured. He just does not have the money to commit to that right now.

As a dog owner yourself, you do have to deal with your domestic cat. Let us help you with that here in Dogalize.  We have what you need to treat your feline companion like he deserves.