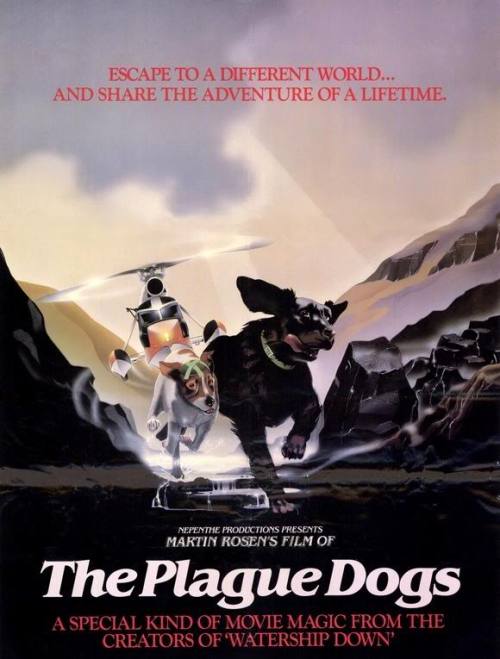 The Plague Dogs is a 1982 British animated film based on the book of the same title, written, directed and produced by Martin Rosen. The book was written in 1977 by Richard Adams, who also authored Watership Down, book that Rosen also adapted into a film.

The center of the story goes around two dogs named Rowf and Snitter, who managed to escape a British facility that performs experiments on animals. The topic of the story is then about the cruelty of practices such as vivisection and animal research. However, the director said that the film was not really and anti-vivisection one but rather an adventure film.

Lake District, an animal research facility in north-western England is using dogs for experimental purposes. Two dogs, Rowf, a Labrador-mix, and Snitter, a smooth fox terrier are the main characters of the film and part of the dogs suffering the torture and cruelty.

They manage to escape through the incinerator, where they are nearly killed before escaping the facility. Once outside, the two dogs are excited about experimenting their newly-found freedom. However, they face an unexpected reality and, to make matters worse, they are being hunted by their former captors.

Through a series of events, they manage to overcome adventure after adventure, escaping their captors. In the end, as they swim towards an island into the mist, their fate is left unknown.

Main Characters of The Plague Dogs

In Dogalize we, of course, are against any type of animal experimentation. We have information and resources on how to best take care of your companion. Visit us and check out everything we have in store for you.