Famed celebrity singer and actress, Rihanna, has this thing for dogs. But her story, or, namely, the story of her dog Oliver is one of a fairy tale.  Back in 2015, Rihanna found him in the bathroom of a club.

Since we are about dogs here, we actually fantasize from telling the story from the dog’s perspective. Because we wonder: what is a dog doing at a club? and, Who would have the heart of leaving him abandoned at the bathroom?

But there he was, left to his own luck. Probably his heart was racing from the torturous noises coming from the dance floor. He probably had run towards the bathroom, escaping his owner, whose owner had sloppily taken him to a club.

Terrified at the ambient that he was not used to, he sprinted towards the one place where the roaring sounds seemed to be muffled away. Suddenly, the slender silhouette of an ebony-colored from Barbados broke in, momentarily removing the muffling and making his ears spike up.

She saw him wrapped around his shaky body. When their eyes met, they both knew that their stories had been mingled by destiny, or by a couple shots of Scotch, if you must.  Either way, Rihanna walked out that bar with someone more treasured than a date; a dog. 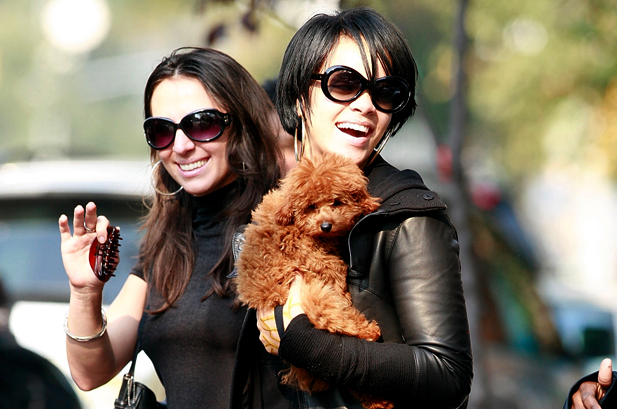 Rihanna’s dog is named Oliver. He is what is known as a Maltipoo, which is a cross between a Maltese and a Poodle. Due to the cute faces of Maltipoos, these have become very popular among celebrities.

The truth is that this hybrid gets all the love from Rihanna and they actually look pretty cute together.  Every mother’s day, Rihanna celebrates the occasion with her pups, Oliver and Pepe.

We are sure that you love your four-legged babies the same way Rihanna loves her.  Let us help you give them the closest to a celebrity life you can get them.  Visit us and check out all the amazing resources we have for you and your furry friend.