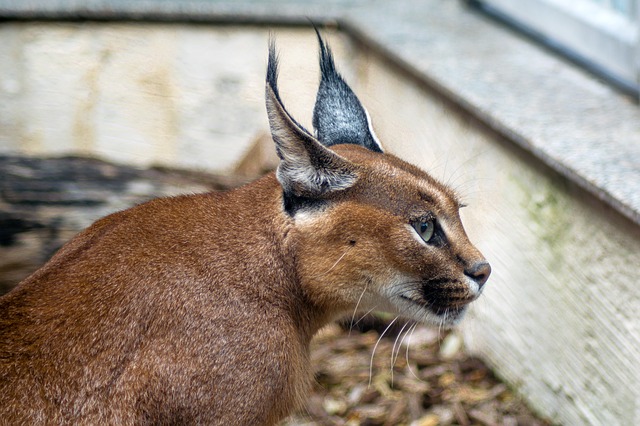 The Caracal cat is a medium-sized wild cat that resembles the lynx. It is native to Africa, Middle East, India, and Central Asia. When it comes to personality, it is more like a serval cat.

As a cat it is, it is mostly nocturnal and hard to spot. It can live alone or in pairs and is pretty territorial. He is a carnivore that usually feeds on birds, rodents, and mammals. As an adult, it can be as tall as 16-17 inches and weigh somewhere between 30-50 pounds.

The main characteristics in the build of this slender and robust cat are the short face, large canine teeth, tufted ears, and long legs. When it comes to body size, the caracal cat is sexually dimorphic, which means that females are smaller than males.

These cats have black line markings on their face, with some individuals having pronounced markings resembling eyebrows. Typically, a caracal cat has a uniform reddish tan or sandy coat. However, black cats can also be seen. The fur is soft, short, and dense. It becomes coarser in the summer.

This cat is mostly nocturnal although some sightings can be made during the day. But they are still pretty difficult to spot. Studies have revealed that they are more active when the temperature drops below 20 °C (68 °F).

Being very territorial, the caracal cat will mark plants and rocks with urine and sometimes with dung. Rodents comprise the majority of this cat’s diet. Technically, they would eat anything but they focus on the one that is most abundant.

Both sexes become sexually mature by the time they turn 1 year, meaning that they can reproduce.

Habitat of the Caracal cat

The habitat of the caracal cat include savannas, forests, marshy lowlands, scrub forests, and semi-deserts. They prefer areas with little rain and availability of cover.

Your cat at home does require you taking care of him. In Dogalize, we have the information and resources you need to better care for your little friend. Follow us and check out what we have in store for you and your cat.