Are Cats Scared of Cucumbers?

There was a viral trend on the internet between cats and cucumbers. Videos all around the internet became viral.  In them, people would place a cucumber behind a cat while this was eating. At the sigh of it, the cat would jump. But, are cats scared of cucumbers exclusively? 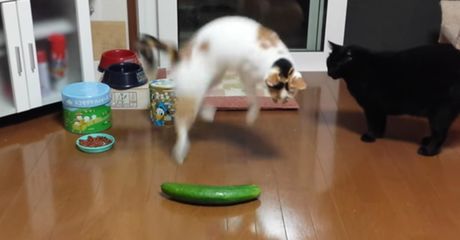 Why Should You Not do it

First, we will take some lines to tell you why you should not try this at home with your cat. Scaring a cat is never a good idea since a startled cat is not aware of his surroundings and he might get hurt. Also, startling your cat can also have an effect on his nervous system.

Most people who would scare their cats with a cucumber would do it while they were eating, which is not healthy as the cat would relate the pleasant action of eating with something horrid. But let’s answer the question: are cats scared of cucumbers?

What is up With Cats and Cucumbers?

So a cat is peacefully eating his meal when the owner unexpectedly places a cucumber behind the unexpecting cat. When the cat sees it, it reacts by losing its mind, jumping up, and running away as far as he can from it. Are cats scared of cucumbers?

There are videos in which the cat stares at the cucumber patiently waiting for it to make the first move. It is not really the cucumber that scares the cat but it is the unexpected sight o it “sneaking” from behind. Anything that you place instead of the cucumber would have the same jarring effect.

Cats have it in their nature to react erratically, move rapidly, or make a lot of noise when they face something they are suspicious about. This is perhaps the effect that the cucumber has. We absolutely do not recommend you doing this but if any other object were to be placed, the cat would probably have the same reaction.

In Dogalize we want to make sure you take good care of your feline. This is why we have tons of information and resources on cats and cat care.  Visit us and check out everything we have in store for you.