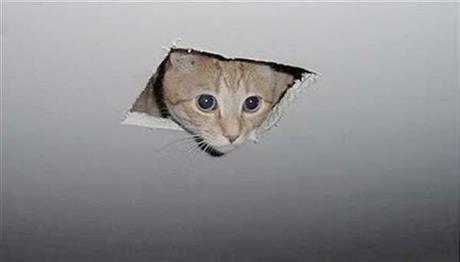 Yes, we have another cat meme inspired by our feline furry friends. We just can’t get enough of them and, well, as we all know, they are the rulers! Ceiling cat is a photoshopped meme of a cat peeking through a hole from a ceiling. It has become so popular that it even inspired some derivatives, including Basement Cat and Basement Horse.

All we know about the original poster of the photo is that it is unknown. Many have claimed to know who the original photographer is. In May 2012, a user from Something Awful claimed that he was friends with the owner of the cat. He even posted a similar photo of the cat in a different angle.

This user also stated that the cat had passed away in 2010.

Encyclopedia Dramatica stated that the photo belongs to a Wikipedia user named Samguana. But this version has not been confirmed by this person.

Several websites were created that same year. All of them hosted the captioned image and added many of their own.

Urban dictionary added “ceiling cat” to their list on June 1st, 2016. Many variants of the image have appeared all across specialized media, even a papercraft version. There were some others who placed him as a god. Others went as far as placing him along with an opposite “Basement Cat“, representing both God and Satan in the lolcat universe.

The Truth Behind Ceiling Cat

A Reddit user named avapoet posted a picture of ceiling cat proving that he was not sticking his face off a ceiling but he was actually inside a wall.  This thread was posted on September 22, 2010, to the Today I Learned subreddit.

So it would mean that the entire meme has been a lie. But that his ok and it is still fun.  Taking care of your cat at home is also fun, but you have to take it seriously.  Here in Dogalize we have the resources you need to become the best owner ever.  Visit us and check out all the information we have for you.