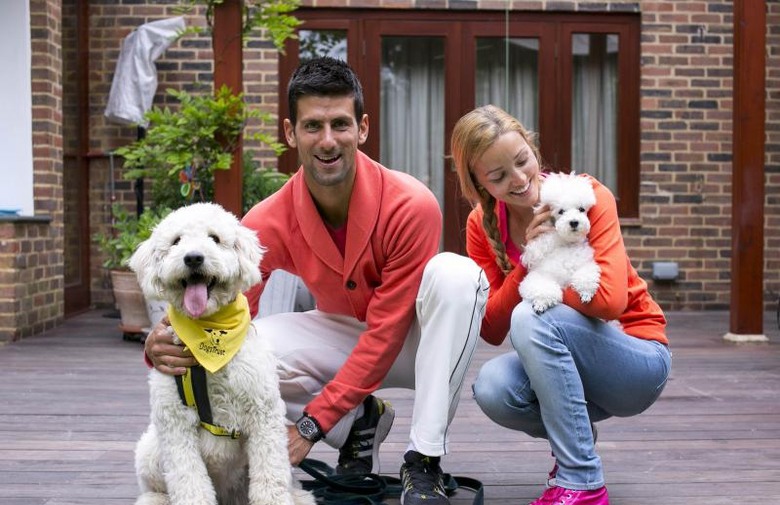 Tennis star Novak Djokovic has his weakness for dogs as well. He is the happy owner of two poodles: Pierre and Tesla. Pierre has been for 10 years with the Serbian player. They have several anecdotes together and stories to tell.


Novak Djokovic and his Dogs

The two dogs of the “Djoker” are Poodles. They are named Pierre and Tesla. Pierre has his own Twitter account and has appeared on the cover of Vogue magazine.

Pierre is ten years old now and is described as being calm but a bit aloof. Tesla is much younger than Pierre. She is only 4 years old. Tesla loves to cuddle and is more playful than her brother.

The story between Pierre and Djokovic that we refer to happened less than seven years ago. During Wimbledon that year, officials told Novak that he would not be allowed to bring Pierre or even get her past the airport. This news disheartened the once number one of the world, and he tried to get his poodle through.

It was Pierre and his then girlfriend now wife, Jelena who would always cheer him through Europe competitions. At that time, Novak declared to be “in distress” due to him not being able to bring his beloved poodle with him.

Due to the rules governing “Pet Passports,” Novak Djokovic was informed that his poodle would not be able to enter the country. But that same year, for the US open, the trio was able to travel together, much to their delight.

During the Australian Open in 2015, Novak Djokovic and Andy Murray were set for the final. Novak and Jelena had been photographed with Pierre and Tesla walking through Wimbledon, right after Novak Djokovic took the men’s competition.

Durint the Australian Open, the couple was photographed with Tesla and Pierre, who already had a doggy passport after the 2011 incident.