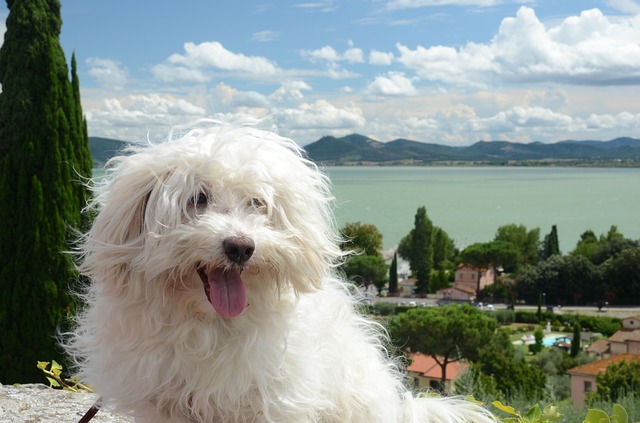 Playful, devoted, and easy-going are some of the terms that describe the Bolognese dog. This 10-lb ball of fur is the cutest thing but be careful, as he can become a manipulative one.

It is said that the Bolognese dog was already highly valued as early as the 11th and 12th century. These beautiful dogs were developed in Bologna, Italy several centuries ago. Their beauty and grace made them a royalty favorite during the Renaissance.

In 1668, Cosimo de Medici sent eight Bolognese dogs to Colonel Alamanni in Belgium and asked him to be given as gifts to several royalty members there. The direct ancestry of the Bolognese dog is unknown, although the genetic line places them closer to the Maltese, a member of the Bichon group.

This dog is square built, small, white, and compact. With a medium size, it is a muscular dog. The jaw is pretty developed and the upper lips do not cover the bottom lips. Their eyes are round and open and black eyelids protect them. A male can stand at a height of 10.5 to 12 inches while a female can be as tall as 10-11 inches. Their weight varies from 6 to 14 pounds.

The Bolognese dog is devoted and intelligent. They are also loyal, earnest, and willing. They enjoy companionship and like to be around their human masters. When it comes to strangers, they can be reserved but will relax once they see their owner’s reaction to such stranger. Bolognese are good watchdogs and they will bark to anything that moves.

To keep the Bolognese with full hair, regular grooming is needed. Nails should be clipped regularly as well to avoid overgrowth. These dogs are not hyperactive so they can do well living in an apartment.

These dogs are fairly easy to train. Their intelligence and willingness to please make them good at obedience dog training. However, they can be very stubborn when they want to get their way. These dogs can be prone to “small dog syndrome”, which makes them believe they are the pack leader to humans.

It’s a good thing that you have the privilege of owning a Bolognese dog. Here in Dogalize, we can help you take the best care of him. Check out all the amazing information and resources we have for you.