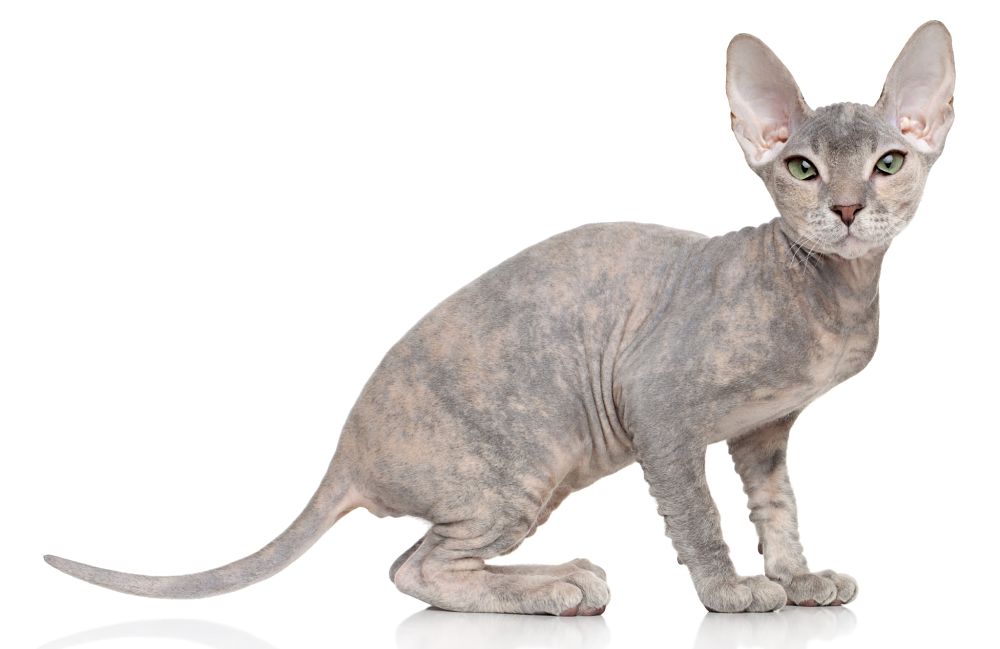 The Peterbald cat is an affectionate and loving cat that loves to be in the company of his humans.  He looks a lot like the Oriental Shorthair but with a hair-losing gene.

The Peterbald cat is the result of an experiment held in St. Petersburg, Russia, in 1994, where a Don Sphynx and an Oriental Shorthair were crossed.  Russian felinologist Olga S. Mironova experimentally mated Afinogen Myth, the Don Sphynx, and Radma von Jagerhov, the Shorthair.

Peterbalds look like Oriental Shorthairs. Because of their hair-losing gene, they can be bald, flocked, velour, brush, or have a straight coat.  The ones that are born with hair, will lose it eventually.

The Peterbald has a muscular build but a slim body. The head is long and narrow, wedged muzzle, almond eyes, and large separated ears.

These cats are a sweet combination of sweet and calm with curious and energetic. They are not too vocal (some have been reported as been very vocal, though) and will follow you wherever you go as they enjoy your company and also like to check your every move.  These cats can live peacefully with other pets, including cats and dogs, as well as with small children.

Caring for a Peterbald

This cat has an athletic build, which means that he probably requires exercise to stay healthy and stimulated. Since they have very little to no hair, they require very little grooming. They will need your assistance to stay warm during the winter and limit sun exposure to avoid sunburn.

Follow us here in Dogalize and check out all the resources we have for you and your pet.  We have tons of information, tips, and tricks, resources, and so much more to help you become the owner your feline companion needs.