The Scottie is a stubborn and independent little dog with a high level of intelligence and sensitivity.  The Scottish Terrier is not a runner and won’t even jog with you, but he is a perfect companion if you take a brisk walk. 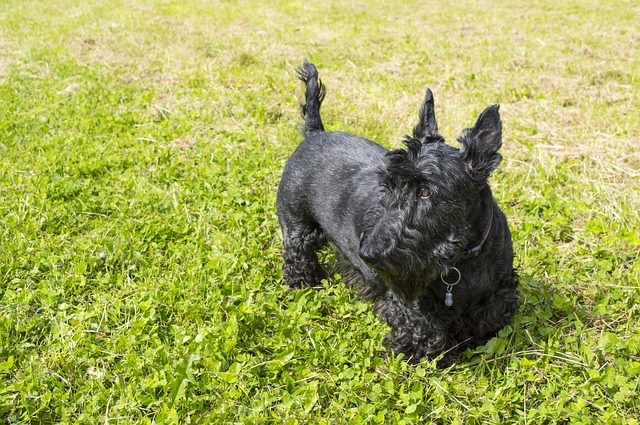 The Scottish Terrier is a pretty old dog breed but still has a history that is rather obscure and unclear. It is believed that the Scottie has its origin in a dog described by Pliny the Elder in 55 B.C.

The Elder writes about when the Romans invaded Britain, “They found, much to their surprise, small dogs that would follow their quarry to the ground.”  Fast forward to 1436 and we find in a book called A History of Scotland by  Don Leslie about a small dog very similar to the Scottish Terrier.

In the 17th century, James I of England presented several dogs to the French monarch. These dogs are though to be the foundation of present-day Scottish Terriers.

The Scottish Terrier is small, compact, sturdy, and short-legged. He has very characteristic looks that include the cobby body, his piercing expression, erect ears and tail, and the short legs.

This feisty dog is pretty territorial, alert, and quick. These dogs are intelligent, playful, and self-assured. In the 19th century, George the fourth Earl of Dumbarton named them “Diehards” because of their determination.

Caring for a Scottish Terrier

If this dog gets bored, he will become destructive so it is important to keep him busy and tired. Remember that a tired dog is a happy dog. Always take him to walks on a leash. They really like water but they can’t swim because of their short legs.

This is a smart dog so he should pick up on commands quickly. He is a hunter though, so if he sees a squirrel, he might make the run to chase it. Crate training is important in order for him not to get in trouble.

If you are lucky to have a Scottish Terrier as your friend, we want to help you take good care of him. We are a community of dog lovers like yourself. Visit us and check out all the cool stuff we have for you.