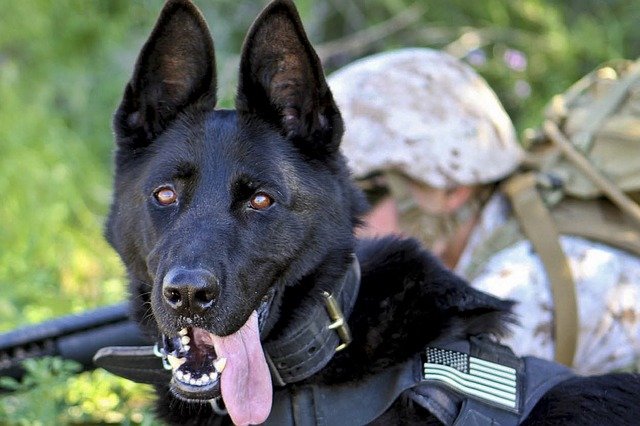 Amazing dog stories: soldier and dog united till the end! This story has something incredible!

This is one of the most amazing dog stories we’ve ever read. This story comes from the American Army, from a soldier and his heroic German Shepherd.

The dog, named Bodza, has served into the Army as a bomb-detector dog since 2006, that means for 11 years; he saved lives detecting bombs in Iraq, Kyrgyzstan and Kuwait. The main human character of our story, the soldier Kyle Smith, started working with Bodza only in 2012, creating a long lasting friendship that unfortunately ended in 2017, due to the death of the dog.

Amazing dog stories: how it all started and ended

After many years of fighting together, and struggling in war zones together, in 2016 Bodza has been diagnosed with degenerative myelopathy, a dog disease that can catch dog breeds like the German Sheperd (and all big dogs) and that is cureless.

The soldier had to take the worst decision a dog owner can take: Bodza had to be put to sleep. When the moment arrived, Smith called all his coworkers and all his friends to support him in this hard moment.

When the time arrived, Smith was surrounded by all his friends to salute, for the last time, Bodza. The dog had also received an American flag to be honored with, and has been cremated.

Smith keeps Bodza’s ashes in his house, together with many pictures of them both in action and in their spare time. Also, the soldier keeps the collar on the rear mirror of his car, to think about Bodza every time. Smith has been amused by how selfless was Bodza and how the dog was always ready to do anything was asked for almost nothing…that is something that we in Dogalize already know, but that always surprises us!