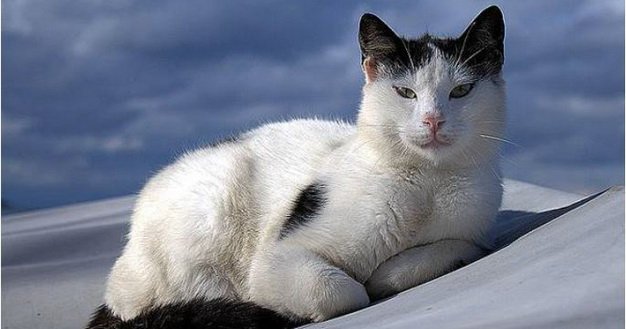 The Aegean cat is an independent medium-sized cat. Even though this cat started to be bred in the early 1990s, it is one of the oldest cat breeds. Original from the Cycladic Islands of Greece, this cat can be found in his hometown roaming around begging for food.  It is a national treasure in Greece.

The Aegean cat is the only cat breed native from Greece. This basically means that it has developed without human interference. They get their name from the Aegean Sea. Despite being a domesticated cat since ages ago, it was not formally considered a breed until it began to be bred in the 1990s.

These cats are muscular, semi-longharied, and bicolor or tricolor. One interesting trait is that one of these colors is always almost white. The coat can also have other colors that include: red, fawn, gray, blue, and black. Their weight goes around 9 to 10 pounds.

The Aegean cat is described as being social, playful, intelligent, affectionate, and very active. Domesticated for centuries, this breed is accustomed to interacting with humans since they have roamed their native Cycladic Islands since they developed. Some people have brought them into their homes where they enjoy the company of their human owners and are very affectionate with them. They will not hesitate on trying to call their attention.

These cats are very vocal and they will vividly express themselves. They make a good combination of cats that likes to be around their family but that are also independent.   The Aegean cat gets pretty well with kids and is a good mouse catcher. In fact, they are pretty good at catching fish too, which makes them great companions for anyone who loves to fish.

Caring for an Aegean cat

The Aegean cat likes to be around his family but is also independent. If you take one home, he will appreciate if you provide a tree or a high place for him to climb. Their coat needs grooming every once a week. If you have a fish tank or aquarium, secure it as their instincts will make them hunt for the fish.

Speaking of fish, they love it, so make sure you provide plenty of it. It is suggested that you give them 70% of moist food.

Here in Dogalize, we have important facts about cats that will help you better understand these felines.  Get in touch with us and learn how to better take care of your furry friend.