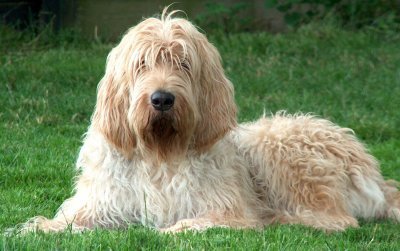 As the name suggests, the Otterhound dog was bred in England to hunt otters.  This hunting dog is also a great family dog and an absolute and playful clown.

Nearly accepted statements trust that the Otterhound dog is a direct descent from the Bloodhounds, it is also thought that they are related to the French Giffords due to their folded ears.   Otters were reducing the population of fish in England, so Otterhounds were created to control the population of otters.

The Otterhound dog was first mentioned in the 12th century during Henry II.  Otter hunting was a sport that was very much liked by the nobility.  Terriers were used to draw otters from their dens and Otterhounds would take over when they ran towards the water.

Otterhounds probably entered the United States in 1900.  The AKC officially recognized the Otterhound dog a breed in 1909.

The Otterhound dog has an imposing head on a large and rough-coated body.  His striding steps are large and he displays great strength.   He has a strong sense of smell.   This allows them to trace the otter when in the water and also track down the otter’s trail once he comes out of the water.

His coat is oily and his feet are substantially webbed.  Their usual weight is between 80 (females) and 115 pounds (males).  Males are typically 27 inches tall and females stand at 24 inches.

This dog is friendly and loves to play with his family, especially children.  Due to their large size, you should not leave him alone with a child as he could unintentionally knock him down.   He is an affectionate dog but he is also independent.  This means that he will not follow you as an owner all around the house.

This dog is good-natured and not a really good watchdog.  He will send a loud bark at any intruder but he will not jump over him.

Caring for an Otterhound dog

The Otterhound dog is not recommended for apartments, due to his size. He is an independent and, if you build him a nice shelter, he could stay in the backyard.  However, he prefers to be with his family and if left outside for too long, he will bark and dig.

Always walk him outside on a leash.  If he were to perceive any scent or trail, there is no talking him off from it.  Provide enough exercise to this hunting dog.

His independence and intelligence make this breed especially hard to train.  You have to convince him that he wants to do what you are asking.  With consistent training, you will require a lot of patience, but results will come along fine.

Here in Dogalize we know how much you love your pet.  Follow us to learn more about dog care, adoption, veterinarian, and a lot more.