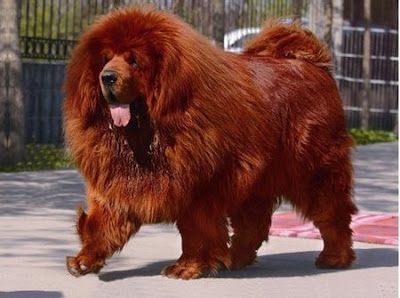 If you are feeling like wasting some serious amount of money in a rather majestic pooch that you would have to pay a bodyguard for, then check out this.  The most expensive dog in the world is more expensive than a Ferrari.  Ok, we are totally understating that.  Try the price of three Ferraris.  Still wrong!

The most expensive dog in the world right now is still a Red Tibetan Mastiff.  It was sold at a staggering price of $1.5 million!  How many Ferraris would that make?  Yes, five of them!  But why are Tibetan Mastiffs so expensive, you ask.  Well, they are not, at least not if you compare it to our Chinese friend above. A normal dog of this breed is sold around $7,000.

Now, you obviously need to be filthy rich to pull this amount like pocket money.  If you think about it, this amount is a nice retirement for over 90% of the population.

The dog was 11 months old last year around February.  It was purchased by a wealthy Chinese businessman.  Recouping this investment would need this businessman to stud out the dog for around $100,000.

But the owner has no intention of studding out or selling the dog.  This big pet, whose name is Big Splash, will be living in a lavishing luxury, probably around perks that you and I could only dream of.

The Red Tibetan Mastiff is a large breed of dog that originated in the Himalayas.  Their huge size allows them to be perfect for the protection of flocks, towns, and people.  These massive dogs have a history that goes 5,000 years back.

At some point in history, they were used as war dogs.  They are an intelligent breed and easy to train.  Due to their size, they require a large yard space.  They can reach a weight of up to 286 pounds when fully grown up.

When you think of such a massive dog, you can only imagine how much money does it take to raise a dog this size.  The price of this dog probably has no explanation and is only a million plus privileged dog.

In Dogalize, we care about your dog and how much you care for him.  This is why we have lots of information and resources for you and your pet.  Visit us to learn more.