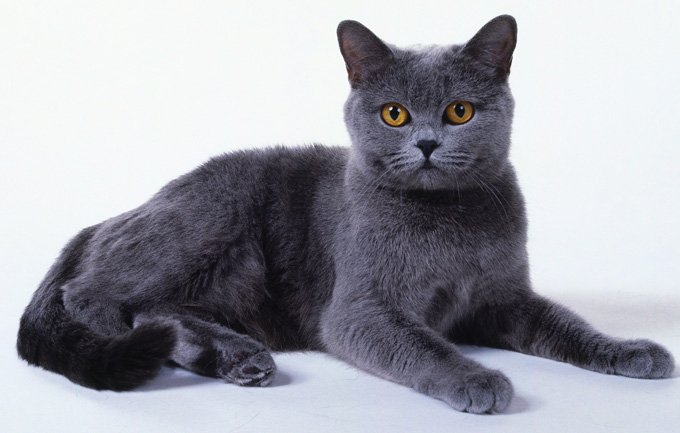 The Chartreux cat is a rare cat breed from France. It holds resemblance with the British Shorthair and the Russian Blue. This cat is muscular with rather short legs. They are well known for their waterproof blue/gray double coat and their beautiful orange or copper eyes.

The Chartreux cat is a natural breed that developed in France around the 18th century. Back then they were sought after due to their coats. The first time, though, that the cat is mentioned is in a 1558 poem by Joachim du Bellay titled Français sur la mort d’un petit chat (French verse on a small kitten’s death).

The French naturalist, Buffon, mentions them in a document for the first time in the 18th century. The two World Wars seriously decimate this cat´s population. European breeders joined forces to keep the breed from extinction. Helen and John Gamon of La Jolla brought the first Chartreux cats to the US in 1971, namely to California.

This cat has great reflexes and his large and muscular body allow for them. They actually make great hunters and hunters still used today. One special physical characteristic is their “smile“.

You will find a Chartreux cat more likely meditating and looking around than you will see him meowing or crying. These are very silent cats which actually examines everything around him with cleverness and observance.

He is not too social but he is not a wallflower either. Usually, he will just sit quietly and wait for a potential enemy to arrive.

Caring for a Chartreux cat

This cat is full disposition as he expects his reward for being a good boy. They are playful cats who enjoy chewing toys and sand litter. Due to his calm nature, he will never experience anxiety when he is left alone at home.

You must visit our interesting section on how to take better care of your cat. Be educated on this since your pet needs.