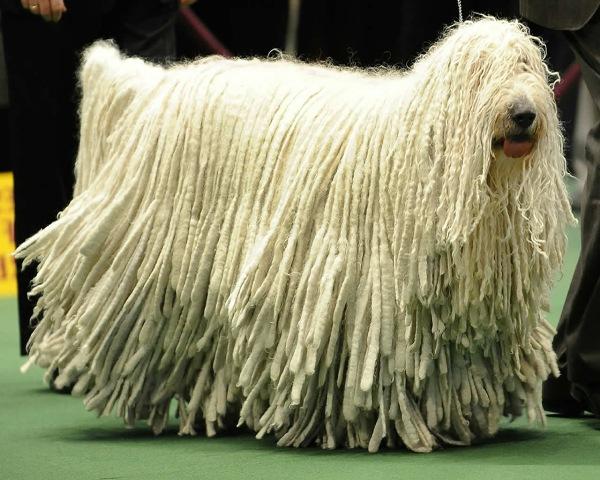 From Hungary comes this beautiful dog designed to guard flock, which has created him a long and noble heritage. Today, he still lives to protect and will stand up for his family with his life.

The first documented evidence of the Komondor dog goes back to the 16th century.  However, this dog has been guarding flock in his native Hungary many years before that.  It is thought to be descended from the Russian Owtcharka, another sheepdog.

His coat made him resemble the sheep he was protecting.  This allowed him to mingle and not be detected by predators until it was too late.

The number of Komondors almost came to zero during World War II, but a group of breeders managed to save the breed.  However, it was still a rare breed although the AKC officially recognized it in 1937.  Very few of them were seen outside Hungary until 1962.  Today, this dog ranking 177th out of 189 in popularity, makes a great companion dog.

The coat of the Komondor dog is thick, long, white, and characteristically corded.  In fact, he sports the heaviest fur coat in the dog world.  This fluffy and soft coat makes him resemble a mop.  These dogs are born with only white coat.  When they mature, they have a soft undercoat and a coarse outer coat.  The elements will make the coat lose its white, which means they need to be bathed regularly.

The Komondor dog is intelligent, independent, and very protective of his home and family.  He takes three years to reach maturity but when he does he is devoted and calm.  They are very aloof of strangers and aggressive to other dogs.

Caring for a Komondor dog

This dog needs a moderate amount of exercise and two or three walks per day.  They need a large fenced area to help him define his territory.

When he is very young, this breed can be easily trained.  But as he grows up to become older, he becomes a stubborn student that can be very frustrating.  These dogs are very smart but they are also independent.

Visit us here in Dogalize to learn more about other dog breeds.  We also have valuable information and resources to help you better care for your dogs.