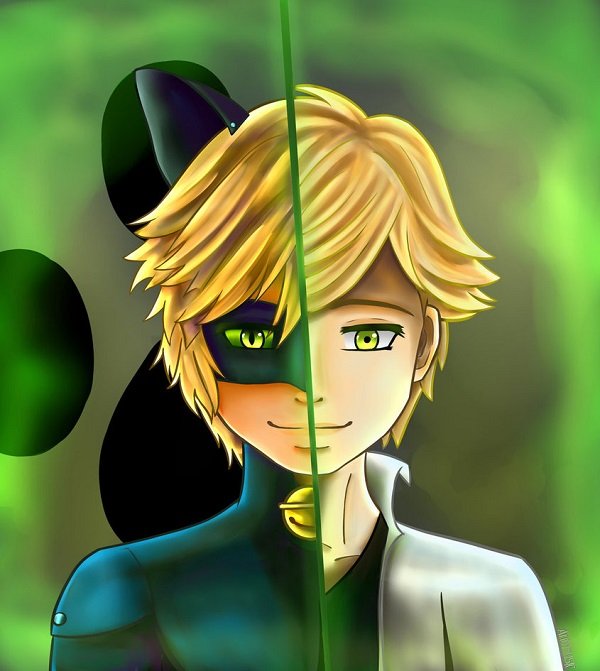 Cat Noir is the alter ego of Adrien Agreste, a fictional character and male co-star of the animated series Miraculous: Tales of Ladybug and Cat Noir. He is a fashion model for his dad´s brand. Using the Cat Miraculous and when inhabited by Plagg, Adrien transforms into Cat Noir.

Adrien has light green eyes and blond hair. He is approximately one head taller than Marinette. When a civilian, he wears a white button-down shirt with sleeves rolled up to his elbows. Under the shirt, which he uses unbuttoned, he wears a black shirt with five colored stripes on the chest. The attire is completed with blue jeans and orange sneakers. On the ring finger of his right hand he carries the ring of Black Cat which he uses to transform into Cat Noir.

Cat Noir uses a black skin-tight cat suit with metallic details. He wears black gloves that end with cat claws. His boots have a hidden wedge, silver toes, and treads in the shape of cat paws. His tail around his waist ends as a tail on his back. He also wears a golden bell on his neck.  His eyes become very cat-like, all green and with slit pupils. On top of those, he wears a mask.

Adrien is shy but charismatic. The fact that he usually lives nowhere beyond his father’s reach he can be slightly naive.

Cat Noir has enhanced abilities of speed, strength, agility, and super stealth. He also has characteristics of a cat such as night vision and enhanced hearing and smell.

He has a staff that he can use to attack or to travel faster.

Remember to stay in touch with us here in Dogalize to learn more about cats and cat care.  There are many reasons why you should stay for a while and explore all the amazing resources we have for you.